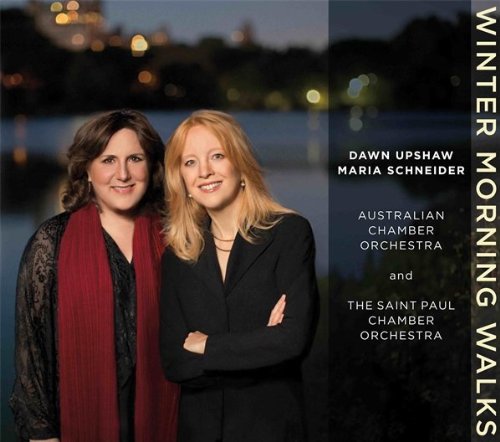 Without reading the booklet-notes by composer Maria Schneider and soprano Dawn Upshaw, you know that life beyond tragedy is celebrated in these elegiac song-cycles, especially Winter Morning Walks. The Ted Kooser poems were written in the thick of cancer recovery with observations (sometimes ecstatic, other times just quietly grateful) of the bleak landscape around him – as sung by Upshaw (herself a cancer survivor) with her newly darkened lower range to match similar qualities in the music. Upshaw has always known exactly what to do with every phrase she sings – a quality even more appreciated in works where Schneider, best known for composing and arranging orchestral jazz, seems be speaking a second language, though speaking it earnestly enough that you might not notice how deftly she departs from traditional song forms.

In the piece’s best moments, Schneider harnesses the power of poetic spareness: the opening, for example, has a few piano notes, quietly dissonant underpinning in the strings and a harmonically independent vocal line, all of which keep the words airborne while letting them speak for themselves. Schneider also resorts to wordless vocalises when wanting to take a poetic idea further and isn’t afraid of emotional outpourings that some listeners might find a bit on the nose.

Carlos Drummond de Andrade Stories, the earlier cycle, has Schneider setting English translations of the Brazilian-language poems with a more pronounced compositional presence, drawing much on her considerable history with Brazilian music. The prologue is entirely a vocalise reminiscent of Villa-Lobos, though a less overt influence is Samuel Barber’s Knoxville: Summer of 1915 – not surprising, since Schneider’s notes mention her particular attraction to the poet’s small-town sensibility, one that, with her Minnesota upbringing, she seems to know well.

One occasionally misses the level of fantasy of Schneider’s jazz life. But this is a disc that’s either taken to heart (which I did) or not at all. It helps to have walked in the shoes of these artists – and, perhaps, to appreciate the less-filtered sensibility of America’s heartland.