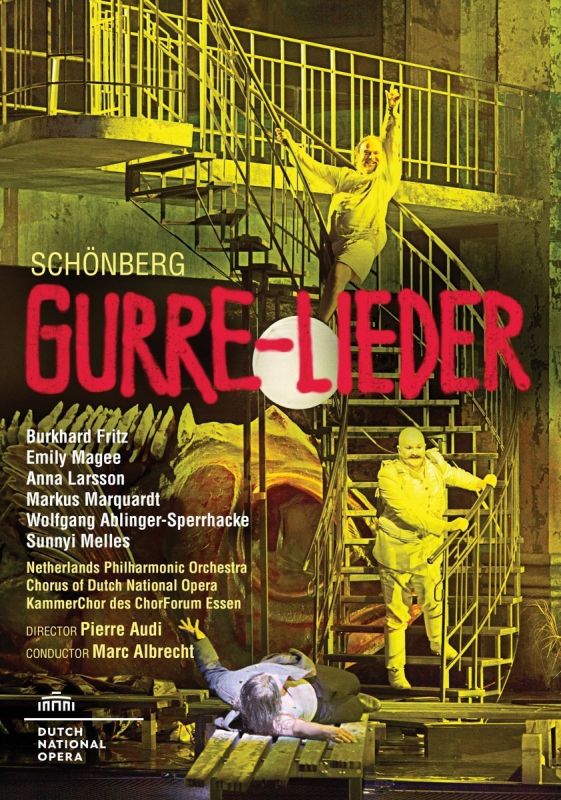 Following hot on the heels of two fine new recordings of Schoenberg’s grand fin de siècle cantata, this release captures something very different: the first attempt to stage the piece. It makes for fascinating viewing.

The guiding spirit is Dutch National Opera’s own artistic director, Pierre Audi; one can imagine a director having a tough time persuading a house to undertake the project in any other circumstances. But Audi wisely chooses to keep his narrative loose and suggestive, emphasising the piece’s affinity as much to Wagner’s Tristan as to Parsifal. Christof Hetzer’s designs, especially the Angel of Death-like Waldtaube, also evoke elements of Stefan Herheim’s famous Bayreuth production of Parsifal as well as, in passing, Claus Guth’s La Scala/Royal Opera Frau ohne Schatten – neither of which, alas, is available on DVD as yet.

The individual songs of Waldemar and Tove in the first part are straightforwardly done, but the two are seen addressing one another in a languorous, long-paragraphed dialogue rather than expressing themselves in isolation. A bed appears at the centre of the wide stage to offer a focal point, and here, as throughout, Wolfgang Ablinger-Sperrhacke’s Klaus Narr (dressed as a kind of albino jolly general, holding an illuminated globe aloft) and Sunnyi Melles’s Weimar cabaret esque speaker are disquieting presences.

Once Tove disappears, we are more than ever aware of the whole piece as Waldemar’s own journey – dreamlike, psychologically complex and ambiguous, up to and including the final chorus, which is all the more moving for the allegorical richness it takes on. The moment he summons his army, who rise jerkily and zombie-like from the stage, is arresting, and only rarely does the direction seem to clutter things up: the arrival of an enormous fish-head – or perhaps it’s the eel Klaus Narr refers to – feels like a rare mis hit.

Burkhard Fritz, though a little stretched vocally, carries the dramatic weight admirably, running the Tristanesque gamut from ecstasy to the deepest despair and delirium. Emily Magee takes a little while to find the shimmering lyricism in her voice but is a moving, entranced and entrancing Tove. Anna Larsson, rather stiff on the recent Chandos recording (10/16), is a sternly impassioned Waldtaube here, and the character’s long scene is a highlight of the staging. Melles’s mercurial narrator, given a spoken prologue, is excellent. The way she and other characters appear even when not singing helps Audi to weave together his compelling vision.

The accompanying documentary focuses on the DNO chorus, with justification: they are terrific throughout. The detailed, virtuoso playing of the orchestra and Marc Albrecht’s clear-sighted but impassioned conducting need fear no comparison with the best audio-only versions. A very impressive achievement all round.