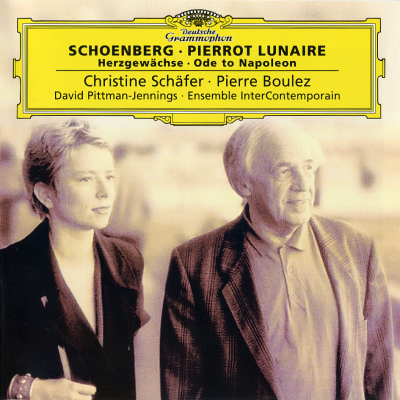 Pierre Boulez’s third recording of Pierrot lunaire is his first to use the Ensemble InterContemporain. The result is an intense yet intimate reading, recorded (doubtless to the conductor’s specifications) in a way that is positively anti-resonant, and which veers, like the music itself, between harshness and reticence.
Boulez’s second recording, with Yvonne Minton, has long been notorious as the ‘sung’ Pierrot, flouting the composer’s specific instructions about recitation. This time Christine Schafer is more speech-orientated, the few fully sung notes perfectly pitched, and although slidings-away from sustained sounds are on the whole avoided, the effect is superbly dramatic in the work’s more expressionistic movements. There are only a very few places (like the end of No. 11) where the voice is too softly projected in relation to the instruments, and only one movement (No. 18) which seems a little short of the necessary sense of menace. Overall, nevertheless, the work’s existence in a strange world half-way between cabaret and concert-hall is admirably caught.
Boulez’s first recording of the Ode to Napoleon was with David Wilson-Johnson and the Ensemble InterContemporain, and this new one is a more than adequate replacement. David Pittman-Jennings (the Moses in Boulez’s recent recording of Moses und Aron; DG, 10/96) has a heavy voice, but he skilfully inflects the sketchily notated dynamics of the vocal part, and the instrumental backing is appropriately forceful and well nuanced. The sound may be clinically dry, but when the performance itself has such expressive immediacy, this is scarcely a serious drawback.
The disc is completed by the brief, exotic Maeterlinck setting from 1911, whose hugely demanding vocal line deters all but the hardiest. Christine Schafer copes, F in alt and all, while the accompaniment for celesta, harmonium and harp weaves its usual spell. A memorable disc, and a clear front-runner among current versions for all three works.'