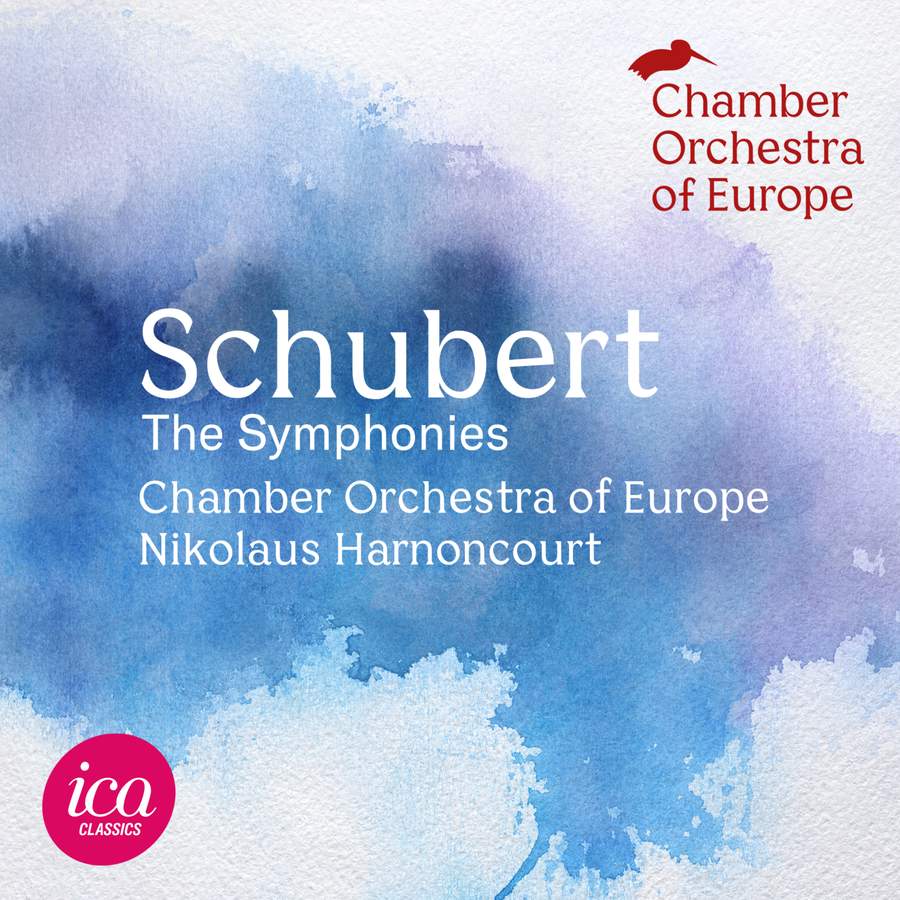 Nikolaus Harnoncourt has already left us memorable, norm-defying sets of Schubert symphonies with the Concertgebouw (Teldec, 12/93) and the Berlin Philharmonic (Berliner Philharmoniker, 8/15). This newly issued cycle, taken from concerts at the 1988 Graz Styriarte Festival, lives up to expectations. Working on the symphonies with the Austrian maestro was evidently a life-changing experience for the young players of the Chamber Orchestra of Europe, who less than a year earlier had completed their Gramophone Award-winning Schubert cycle with Claudio Abbado. In the booklet several of them share their memories of that July in Graz: of Harnoncourt’s ‘maniacal passion’, his ‘empowerment of the bass end of the orchestra’, his understanding of Schubert’s roots in Austrian folk music and his encouragement of risk-taking. One Harnoncourt quote has become a watchword for horn player Stephen Stirling: ‘On the border between security and catastrophe lies beauty.’

Like the Concertgebouw cycle, especially, these brilliantly played performances, caught in a warm, clear acoustic, at their best marry minute precision of dynamics, accentuation and articulation with a devil-may-care spontaneity. With his characteristic balancing of sonorities – lithe, crisp strings, sharply incisive flutes and oboes, unabashed brass – Harnoncourt is forever seeking out the music’s disruptive, discordant elements. In the ostensibly blithe first three symphonies, coltish grace is repeatedly threatened by destabilising forces and an undertow of melancholy, not least in the Andante variations of No 2. Typically, extreme contrasts rule, most obviously between the fast, abrasive minuet-scherzos (No 2’s becomes a battleground between strings and wind) and their leisurely Ländler trios – Harnoncourt’s sole concession to Viennese Gemütlichkeit. Alfred Brendel once aptly observed that ‘Schubert was an accent maniac’. Harnoncourt is the conductor to make the point.

Contrasts with the (to over-generalise) more amenable Abbado are especially pronounced in the so-called Tragic, No 4. Both conductors worked from Schubert’s original manuscript, meaning, inter alia, the removal of eight bars (added by Brahms) from the end of the exposition, and playing the opening of the finale as a bassoon solo. But in the outer movements Abbado sounds almost comfortable alongside Harnoncourt’s dangerous, quivering vitality – partly a matter of pace and accentuation (in the finale Harnoncourt is appreciably quicker than in his Concertgebouw recording), partly of his constant energising of the inner voices. And where Abbado plays the exquisite Andante con amore (and why not?), Harnoncourt chooses an easy walking pace and combines maximum delicacy (piano and pianissimo, as ever, scrupulously differentiated), with a keening urgency in the F minor episodes.

Harnoncourt’s care for Schubert’s inner-part writing again pays dividends in No 5’s flowing Andante. The many dialogues between strings and wind, and upper and lower strings, are lyrically intense, yet without a whiff of indulgence. As Harnoncourt eloquently reminds us, this is Schubert the song composer transplanted to the instrumental sphere. The Romantic within Harnoncourt turns the Trio of the hectically paced Minuet into a dreamy, nostalgic musette – an extreme contrast too far, I spontaneously scribbled. With their fierce, slashing tuttis, garishly coloured by hollering horns and piercing high flute, No 5’s outer movements are light years away from the dapper charm of Beecham’s famous 1950s recording (EMI, 8/90). Ever the controversialist, Harnoncourt seems determined to overturn preconceptions about this most overtly Mozartian of Schubert’s symphonies.

In the opening Allegro of No 6 – Schubert’s answer to Haydn’s Military Symphony – the fabulous COE woodwind caper and frolic with delightful abandon. True to form, Harnoncourt downplays the Rossini-esque jauntiness of the Andante in favour of something more wistfully reflective and, in the minor-key episode, explosive. As in the Concertgebouw cycle, though, the finale is eccentric to a fault: a mincingly slow initial tempo that suddenly lurches forward at the first forte and then pulls back again whenever the balletic main theme returns. The upshot is to make an already episodic movement even more disjointed.

‘A stark, harrowing experience’ was Jonathan Swain’s verdict on Harnoncourt’s Concertgebouw Unfinished. If anything, this COE performance is even more unsettling, from the Stygian tread of the opening to the Andante’s fragile, unearthly close. The relative pacing of the two movements seems spot on. Building the sound upwards from the basses, Harnoncourt more than ever balances chords for maximum discordant effect, whether in the excruciating climax of the first movement’s development or the cataclysmic tuttis of the Andante, which is here anything but a consolatory vision after the tragic opening movement. Only the first movement’s famous G major cello theme provoked doubts, with its choppy phrasing against disconcertingly prominent clarinet syncopations. And as with the Concertgebouw, Harnoncourt for some reason lops off a bar in the bassoon-horn transition to the theme (bars 38-41).

Harnoncourt’s immersion in the Austrian vernacular bears exhilarating fruit in the ‘Great’ C major, that music of mountains and woodlands dubbed by Roger Norrington ‘Schubert’s Sommerreise’. No conductor I know has ever brought a more alluring swing to the Scherzo’s violin-cello waltz (from bar 31) or a more infectious sway to the full-throated Trio. There are, inevitably, things to quarrel with, including Harnoncourt’s ungainly spurt forwards into the first movement’s Allegro and the diminuendo, rather than accent, on the symphony’s last chord. But from the beautifully voiced counterpoints of the Andante introduction to the blazing Dionysian energy of the finale (miraculous precision from the COE in the ubiquitous triplets), Harnoncourt reinforces both the symphony’s al fresco associations and its unbridled celebration of the power of movement. There is darkness, even terror, in the Andante, launched at a proper con moto by the superlative first oboe: in the menacing soft trumpets, or in the implacable build towards the central catastrophic fff climax, horns and trumpets locked in cosmic warfare against scything strings and screeching flutes. I can’t recall a more searing performance of this movement, or one that probes such troubling extremes. Which is just as Harnoncourt would have wanted it.