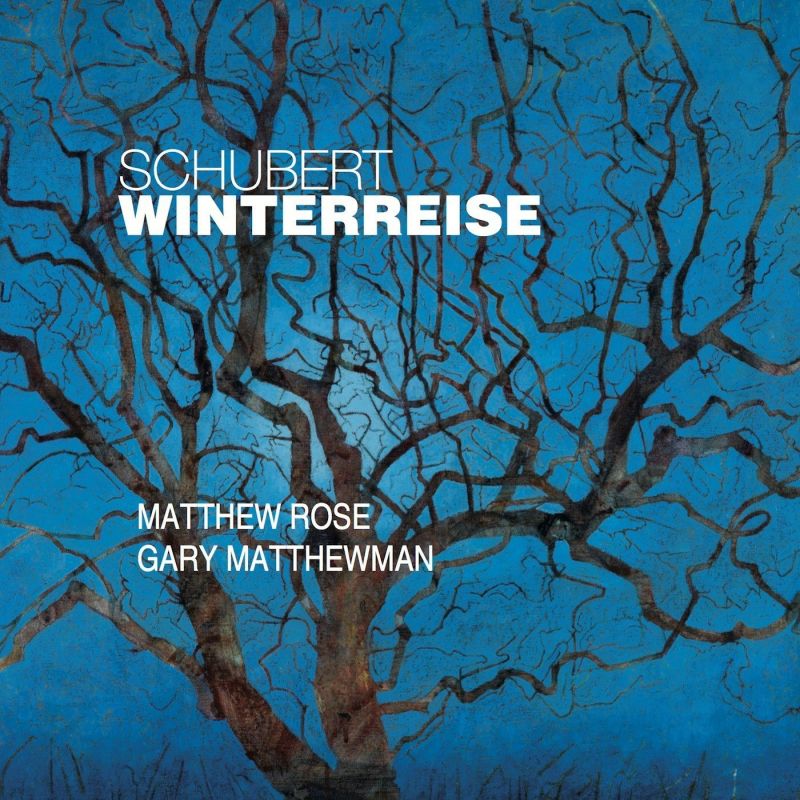 My spontaneous reaction after hearing Matthew Rose’s trudge across Schubert’s snowbound landscape was ‘He’ll survive’. From the flickering will-o’-the-wisp of ‘Irrlicht’ onwards, most singers convey varying degrees of mental unbalance. Rose’s voluminous teak bass, ideal for operatic kings, fathers and villains (not least his magnificent Claggart in ENO’s Billy Budd), does not naturally encompass vulnerability. In the lavishly produced booklet (which includes a penetrating essay by Susan Youens, wintry paintings by Victoria Crowe and delightful drawings of the recording sessions by Tessa Henderson), he refers to Winterreise, in contrast to Die schöne Müllerin, as ‘an old man’s cycle. It has the universality too, but the depth of voice suits it.’ Rose’s certainly does. Although his German vowels could be tighter (‘Der’ tends to sound like the English ‘dare’), his performance often recalls the Wotanesque stoicism distilled by that great Wagnerian Hans Hotter, in his EMI recording with Gerald Moore.

Over the years a mere handful of true basses, most famously Martti Talvela and Kurt Moll, have recorded Winterreise, none with complete success. For one thing, managing a deep, bulky voice tends to entail slow speeds, with a loss of Schubert’s gehende Bewegung, the walking motion crucial to several of the songs. Not here. Like Hotter before him, Rose can effectively soften and lighten his timbre, while he and his pianist partner Gary Matthewman choose their tempi discerningly. Only ‘Die Krähe’, the traveller’s strange, hallucinatory vision of an encircling crow, is controversially slow. But singer and pianist vindicate their choice with a performance of mesmeric intensity, the voice spinning a trance-like line against the keyboard’s eerily limpid cantabile.

Whatever their chosen keys, parts of Winterreise lie uncomfortably low for many tenors and baritones. Rose can maintain quality and sonority over a wide compass. The rounded depth of his low register, allied to seemingly inexhaustible reserves of breath, are priceless assets in, say, the sombrely confiding ‘Ei Tränen, meine Tränen’ in ‘Gefrorne Tränen’, in the grand, arching lines of ‘Wasserflut’, and in ‘Der greise Kopf’, sung with Lear-like grizzled majesty. With no false histrionics, Rose makes the traveller’s moment of realisation ‘Wie weit noch bist zur Bahre’ – ‘How far it is still to the grave’ – as bleakly terrifying as I have heard.

Rose’s jilted wanderer can encompass a touching pathos, as at the yearning close of ‘Frühlingstraum’ or the heartbreaking major-key section of ‘Der Wegweiser’ (‘Habe ja doch nichts begangen’), where he reflects with bemusement on his undeserved plight. In ‘Im Dorfe’ he contemplates the sleeping villagers with rueful tenderness (‘Je nun, sie haben ihr Teil genossen’). More typically, Rose veers between sombre melancholy, defiant bitterness and a sheer determination to keep going. ‘The central figure is completely broken,’ he observes in the booklet. Yet nowhere is there a whiff of self-pity. In the third verse of the opening ‘Gute Nacht’ Rose erupts in anger, spitting out consonants vehemently before sinking back into sad reverie. The final verse, usually a cue for an elegiac pianissimo, is more sarcastic than nostalgic, the final ‘An dich hab’ ich gedacht’ sung as if through clenched teeth. Similarly, Schubert’s magical turn from minor to major in ‘Auf dem Flusse’, as the wanderer carves the date of their first avowal of love into the ice, provokes a snarl of reproach rather than the aching tenderness suggested by most singers. You can almost see the embittered curl of his upper lip as he speaks of the broken ring entwined around the lovers’ names.

The incisive edge on Rose’s ample tone is splendidly heard in the desperate, fist-shaking bravado of ‘Mut’ and ‘Der stürmische Morgen’. Elsewhere, too, Rose’s wanderer seems to mock the absurdity of his own predicament, as at the final ‘Wein’ (‘weep’) of ‘Letzte Hoffnung’, where other singers, including Fischer-Dieskau, in his various recordings, and Matthias Goerne, with Graham Johnson (Hyperion, 1/98) and Alfred Brendel (Decca, 9/04), find a lamenting quality of tone. At the close of ‘Das Wirtshaus’, where the exhausted wanderer fails to find the consolation of death, he strikes a note of almost heroic defiance. Even the final ‘Der Leiermann’ is forthright rather than haunted, ending with a vehement challenge to himself and the hurdy gurdy man. Like Hans Hotter, Rose leaves one with a sense of a vast burden of suffering determinedly endured against appalling odds, of Lear’s ‘Men must endure their going hence, even as their coming hither. Ripeness is all.’

If both singer and pianist tend to underplay Schubert’s frequent accents (say, in the frantic, stumbling ‘Rückblick’), Gary Matthewman counters the dangers of downward transposition by ensuring that Schubert’s transparent, precisely imagined textures remain clear. Bass-lines are always firmly, eloquently etched, crucial when Schubert often thinks in terms of a dialogue between voice and keyboard bass, as in ‘Erstarrung’ and the contrapuntally conceived ‘Der Wegweiser’. While there are more moving Winterreise recordings, not least from Goerne and Fischer-Dieskau, Rose’s deeply felt, impressively sung performance seems to catch, more than most, something of the poet Müller’s mordant, mocking irony which Schubert chose to soften and deflect when he set the verses.