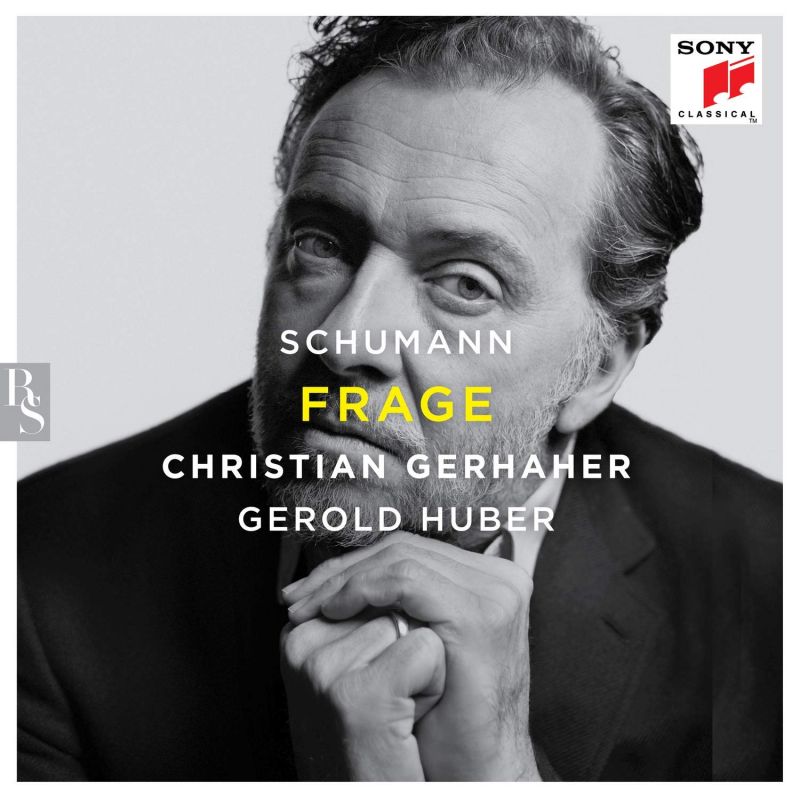 Any fan of Lieder will have rubbed their hands with anticipation when it was revealed a couple of years ago that Christian Gerhaher and Gerold Huber’s next big project, after an excursion into Brahms’s Die schöne Magelone and a return to Schubert’s Die schöne Müllerin, was to be a complete survey of Schumann’s songs. Not all will be sung by Gerhaher, and the booklet for this first volume trails the next, featuring Myrthen, in which the baritone will be joined by Camilla Tilling. But most will, and I’d be surprised if the 10 CD box scheduled for release in 2020 does not prove to be a treasure trove of rare riches.

Things seem to start unassumingly, though. Gerhaher and Huber set out their stall with the six late Gesänge, Op 107, rarely heard together on disc. But they are performed with an exquisitely tender melancholy and Innigkeit that goes on to characterise most of the performances on the album. We arrive immediately in these two artists’ extraordinary imaginative world, where art only half conceals art, where a sense of straightforwardness and directness comes through the fact that every note has been crafted, every vowel carefully coloured, every consonant – especially the exquisitely rolled Rs – minutely measured.

But in beginning with Op 107, Gerhaher and Huber are already making a statement. The set starts with ‘Herzeleid’ (a paraphrase of Gertrude’s account of Ophelia’s tragic demise), and continues with several songs usually assumed to be designed for a female singer. That this apparently bothers Gerhaher not a jot – the convention doesn’t get a mention in his generous and intelligent booklet note – seems typical of his recent shift towards an approach to song more objective than that which he took on his earlier recordings (especially the outstanding Dichterliebe from a decade and half ago – RCA, 12/04) – a more presentational than experiential style, one might say. But there’s certainly never any sense of the songs becoming any less moving, communicating less humanity; in fact, the opposite seems to be true.

In the booklet, Gerhaher further explains how he views these sets as cycles bound together by what he calls a ‘lyrical dramaturgy’, underlying thematic and poetic links. This brings further rewards and insights, not only in Op 107. Gerhaher detects an irony, for example, running through the three Romanzen und Balladen of Op 49, which results in a supremely subtle, quietly subversive performance of ‘Die beiden Grenadieren’. ‘Die Warnung’, the only song allowed to stand alone, becomes an infinitely touching study in tender numbness, while the performances of Op 83 and Op 142 (which Gerhaher admits can’t be viewed as a cycle) are every bit as fine. The latter concludes with a performance of ‘Mein Wagen rollet langsam’ of rare perfection.

At the heart of the programme, though, is one of Schumann’s great recognised cycles, the Kerner-Lieder of Op 35, which Gerhaher presents as an exploration of loss and remembrance of a former happy life. As such, the outdoorsy numbers come across in almost abstract terms – attempts to recapture recalled feelings and urges – while his ‘Stille Tränen’, superbly sung, is characterised by something like quiet but futile defiance. But it’s in the more internalised songs that he really offers something special: in a desperately moving ‘Stirb, Lieb’ und Freud’!’, or in almost unbearably tender accounts of ‘Auf das Trinkglas eines verstorbenen Freundes’ (especially as we enter the final verse) or ‘Stille Liebe’.

I’ve barely mentioned the quality of Gerhaher’s singing, without which his approach would come to little. The voice is still extraordinarily beautiful; the quieter passages in the upper range come across with an especially beguiling mixture of sweetness and steel. Everything is under astonishing technical control. Only occasionally does one feel a little short-changed with the quieter singing in the lower and middle register, where the sound can be bleached – but it’s a small price to pay. Huber’s piano-playing, meanwhile, is a constant marvel of sensitivity and control. In every bar you can sense the closeness of the partnership.

Perhaps the greatest achievement, though, is that all this care and attention is worn so lightly: Gerhaher and Huber achieve an almost alchemistic feat in making so much artistry feel so natural. Despite the constant self-reflection, their approach never – to my ears at least – comes close to self-indulgence. With excellent sound from Sony, this is an album to treasure and to savour – and to listen to again and again.