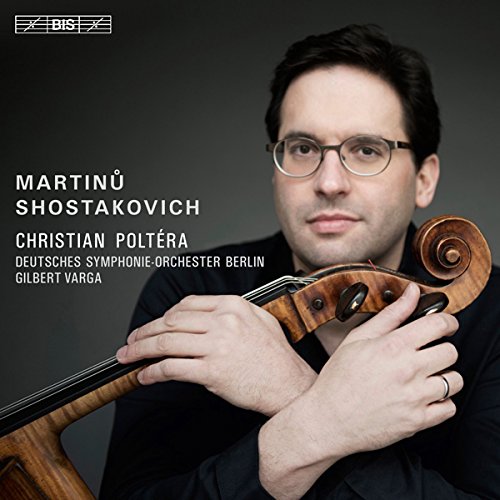 Martinů completed his Second Cello Concerto in January 1945, shortly before commencing work on the Fourth Symphony. In comparison with the First Cello Concerto, the Second is a rather neglected work, not helped by Martinů’s failure to secure a performance during his lifetime. It is nevertheless a highly attractive piece, luminously scored and imbued with lyricism and an air of nostalgia. Christian Poltéra’s performance is appreciably faster in all three movements than the recordings by Angelica May and Raphael Wallfisch, but his approach very much suits the music’s rhapsodic nature while still ensuring the score’s darker and more pensive passages make their effect. The heartfelt close of the first movement is a particular highlight, and the extrovert melodies of the Allegro finale are projected with virtuosity and excitement. The playing of the orchestra under Varga has all the character and refinement of the Czech Philharmonic under Neumann for May and is much more clearly recorded.

Shostakovich’s Second Cello Concerto has enjoyed a far greater number of recordings than the Martinů, although few have managed to challenge the riveting intensity of those by the dedicatee, Rostropovich. This new version comes remarkably close. From the brooding introduction through to the enigmatic percussion-accompanied conclusion, Poltéra plays with an impressive focus and concentration, investing Shostakovich’s searching, melancholic writing with a conviction that I find enormously compelling. The performance of the cello’s faster passages is similarly memorable, notably in the sardonic central Allegretto with its use of the Ukrainian street vendor’s song ‘Come buy my bubliky’. With its scything strings, rasping bassoons and superbly intense horn interjections, the orchestra’s vivid accompaniment contributes immensely to the success of the performance and, as with the Martinů, the recording quality is excellent. Strongly recommended.

(The) Glory of Rostropovich