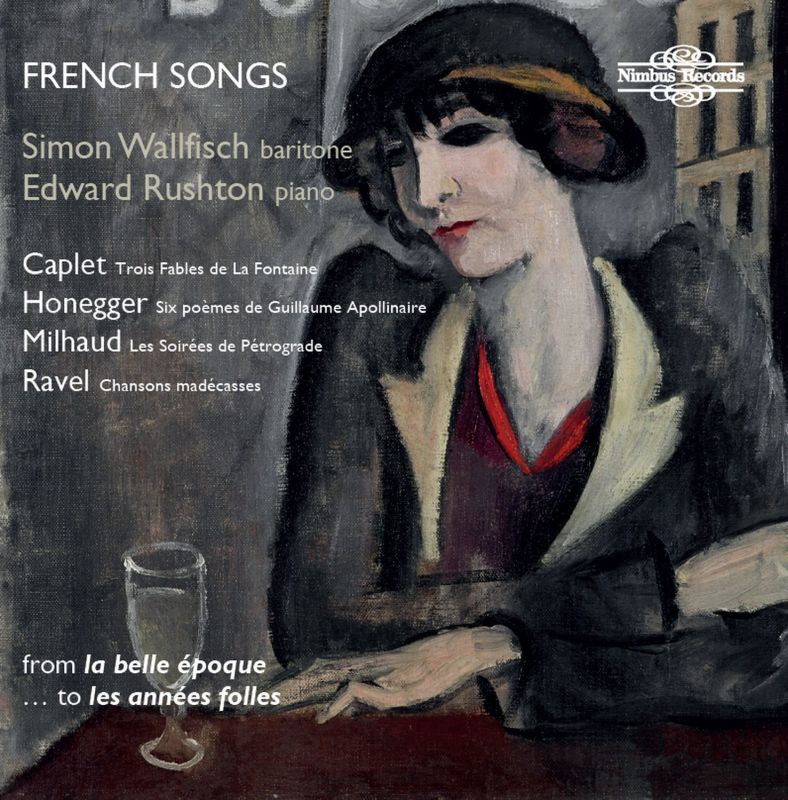 Multitalented Simon Wallfisch is known to many for his appearances as ‘The Singing Cellist’, though here he joins pianist Edward Rushton for a straightforward recital of French songs composed during the First World War or the following decade. Chansons madécasses is the most familiar work, though the principal attractions lie, perhaps, in some of the lesser-known pieces: Honegger’s beautiful settings of Apollinaire; Milhaud’s Les soirées de Pétrograde, with its withering portraits of Russian-Revolutionary expats in Paris; and a haunting group of Caplet’s songs, written at the front while on active service.

Not all of it is ideal. The recording was made in two instalments, in January (Milhaud, Ravel) and April (Caplet, Honegger) 2015, and one notices a pulse creeping into Wallfisch’s handsome if grainy tone at the later sessions. It proves intrusive in Caplet’s wartime songs, where the slow-moving lines really need to be steadier. ‘Aoua!’ from Chansons madécasses, meanwhile, lies curiously high for a baritone who has Pelléas in his repertory.

Yet there’s also no doubting the quality of his artistry. Dynamics are immaculately controlled, even when the pulse in the voice is not. Wallfisch has a consistently fine way with words, and Honegger’s Apollinaire settings reveal a deep, instinctive feel for French poetry. Caplet’s 1919 La Fontaine Fables bring out the singing-actor in him, meanwhile, his ceaseless shifts in tone creating characterisations of quite exceptional vividness. Rushton matches his verbal dexterity with colourful, insightful playing, and the pair are joined by flautist Efrain Oscher and Simon’s father Raphael for the Ravel, the outer songs of which are as sexy as you could wish. Texts are provided; you have to download translations from lieder.net/lieder.