SKEMPTON The Rime of the Ancient Mariner. Only the Sound Remains 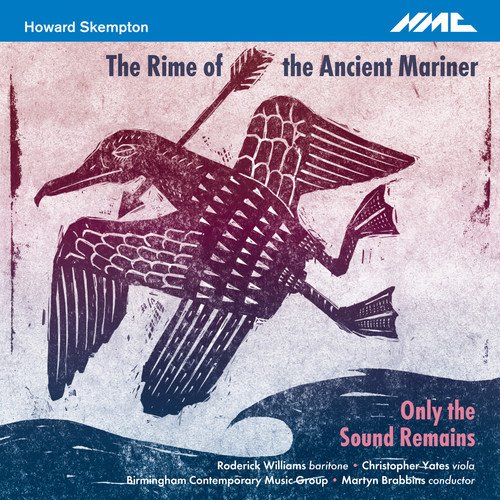 Time was when Howard Skempton was considered primarily as a master of the miniature, notably those for piano and accordion. His output this century, however, has extended into larger and more diverse realms; the present disc features two works, each lasting over 30 minutes, finely contrasted in themselves while also utterly characteristic of their composer.

The length of Coleridge’s The Rime of the Ancient Mariner must inhibit musical treatment, and Skempton had to overcome initial doubts before arriving at this abridged setting (2015) that amply preserves the original’s narrative unity. The vocal line is necessarily dominant, given the wealth of imagery to be conveyed, though it helps when Roderick Williams has a clarity of enunciation second to none. The instrumental accompaniment for string quintet, horn and double bass is no less acutely judged; notably in those brief interludes which elide between textual excisions and crystalise the music’s emotional essence to haunting effect.

An instrumental work of equal length requires a different kind of continuity, and Skempton has duly provided this in Only the Sound Remains (2009). Its title the first line of a poem by Edward Thomas, this is less a concerto for viola than one for chamber orchestra; the 16-piece ensemble is drawn into a continuity whose melodic elaboration results in a vast passacaglia of a cyclical motion the more mesmeric for its understatement. Christopher Yates is naturally attuned to his concertante role, while Martyn Brabbins secures audible finesse from BCMG.

Superbly recorded and informatively annotated, this is a valuable addition to Skempton’s expanding discography and welcome acknowledgement of his significance in his 70th year.

SKEMPTON The Rime of the Ancient Mariner. Only the Sound Remains

The Rime of the Ancient Mariner

Only the Sound Remains