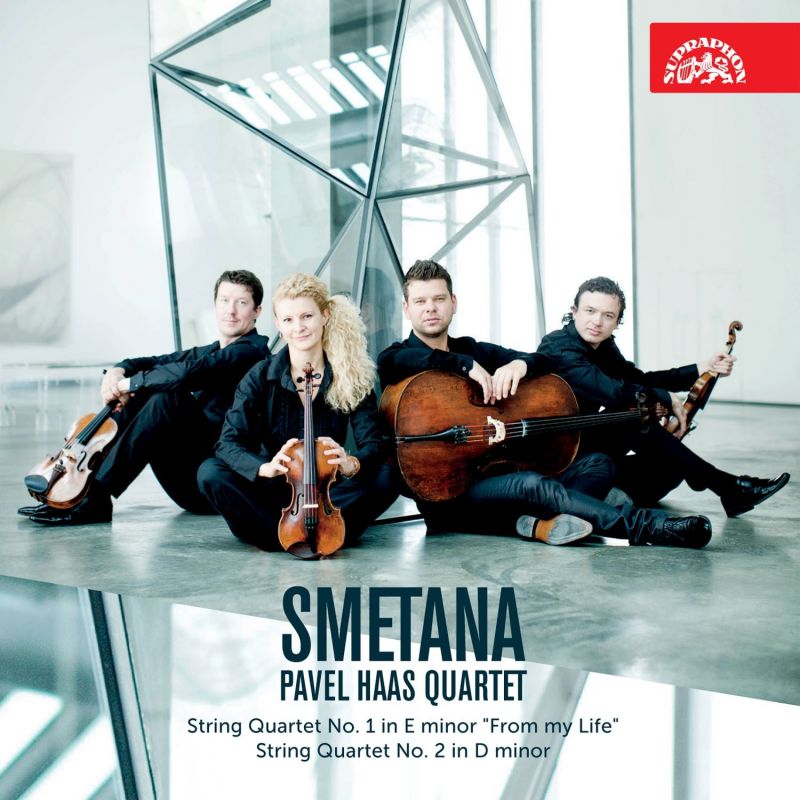 This is becoming a bit of a habit. The Pavel Haas Quartet record a disc. Critics swoon and reach for their superlatives box, usually hidden away on a top shelf to avoid overindulgence. Result? It ends up as Disc of the Month and a hot contender for a Gramophone Award. But swooning is not enough, and nor are superlatives. So let’s try and explore why this is so spectacularly good.

The PHQ already have an extraordinary track record with music of their Czech homeland (Dvořák, Janáček and of course Haas), so their Smetana was always going to be highly personal. Their sound is, as ever, immediately recognisable – partly due to the sheer richness of timbre but also the sense of four personalities at play. That is palpable from the opening viola solo of the First Quartet: here, Pavel Nikl revels in the juicy lower register of his instrument and the effect is markedly different from the Jerusalem Quartet’s viola player – fine though he is – who is less lustrous-toned. In the answering phrases between the two violins what is striking is the level of detail combined with an apparent spontaneity. What this new version captures particularly compellingly is the sense of the music’s extremes – at times it’s hard to believe you are in the presence of only four players, so intense is the sound. No element is taken for granted, and the way they colour the dotted falling figure that dominates so much of the first movement is a masterclass in imagination yet never sounds in the least bit contrived.

Not everyone is going to agree about their approach to the polka-infused second movement. They are more galumphing than the Jerusalem, who cut a fine, sophisticated dash and are slightly fleeter in the outer sections. On the other hand, the PHQ’s viola brings off the quasi tromba marking very effectively (tr 2, 0'48"), while in the fairground-like Trio, the two violinists judge to a nicety the crescendos and diminuendos on their double-stopped chords in which Smetana conjures up a very lifelike squeezebox (sample from 1'46" onwards). In fact, so focused are they on the characterisation of this movement, injecting into the più allegro markings not just speed but an increase in intensity, that a moment of wayward tuning, just before the five-minute mark, is left uncorrected. Though initially disconcerted, I did find this became less of an issue on repeated listening.

The PHQ’s inherently ‘vocal’ style gives the First Quartet’s biographical elements a particularly poignant edge. This is especially effective in moments such as the cello soliloquy that opens the Largo sostenuto, which finds Peter Jarůšek voluptuously eloquent, his poignant phrases answered with equal intensity by leader Veronika Jarůšková (tr 3, 0'50"). Here, the PHQ are several degrees warmer than the more forlorn Talich, whose reading prizes plangency over lyricism and whose every climax is almost painfully hard-won. In the finale, the Jerusalem find a thrilling drive, without making light of the more inward moments. Yet the PHQ are to my mind more compelling still, launching into it with a heady exultancy which makes the catastrophic moment where Smetana’s deafness is announced by a piercing high E on the first violin (tr 4, 3'34") all the more searing – more shocking in impact than either the Jerusalem or even the Talich. Nothing can be the same after this; and in the closing minutes of the quartet they manage to convey a succession of emotions – warmth, doubt, determination and ultimately a quiet sense of resignation.

There is no shortage of exceptional readings of the First Quartet but Smetana’s Second is another case entirely. It has never enjoyed the same success as the First, being dismissed (rather in the manner of Schumann’s late music) as being the product of a deeply disturbed mind. But, as we’ve belatedly learnt with Schumann, disturbed does not preclude flashes of genius, which is surely the case here. Smetana wrote the Second Quartet just months before his death from syphilis and – while not wishing to draw oversimplistic parallels between life and work – anguish combines with an extraordinary intensity. It’s easy to understand why it has perplexed listeners, especially after the First, with its generously signposted autobiographical elements, for here is a work that constantly shifts, eluding your grasp with its endlessly varying tempos and moods. In the wrong hands it can seem merely ungainly.

The PHQ understand absolutely the plasticity of Smetana’s vision and convey it unerringly, unshrinkingly – and in some ways even more convincingly than the Talich, which is saying something. This is extraordinarily bold playing – and they truly capture the sense that Smetana is writing symphonic quartet music. The extremes are, again, tellingly conveyed. Take a passage such as the second movement (tr 6, 1'03") where, in contrast to the angry, angular octave writing, Smetana gives the viola a consoling melody against lolloping muted violins (poetically marked zephyroso), conveyed with great immediacy here. And if you want to hear how powerful this group can sound, just sample the opening of the third movement (tr 7), which has an inexorable vehemence to it that is frankly terrifying. It gives the imitative writing that follows not only a heart-rending fragility but also an otherworldliness that seems to summon the spirit of Beethoven’s late quartets. And in the PHQ’s hands, the dance of the finale, now affirmative, now hesitant, seems to pose as many questions as it answers. Is he going to snatch victory from darkness? For a time it seems as if it might be so; but the final repeated slashing chords (tr 8, 2'22") have an unmistakable air of desperation about them.

The recording captures the quartet as if they were in your living room and if anyone thinks that a disc of under 50 minutes is a bit mean these days, sample the music-making and you’ll soon change your mind. This is the kind of disc that makes record reviewing the best job in the world.