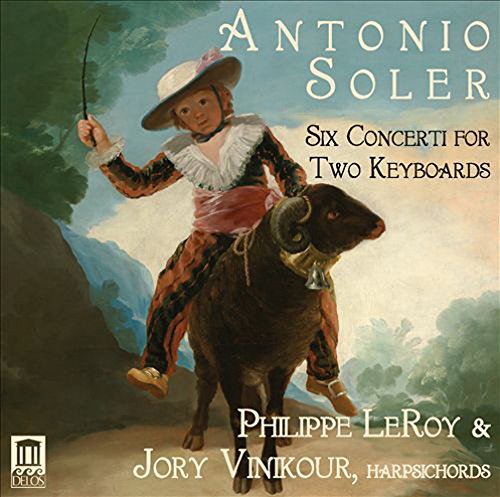 Despite their title, Antonio Soler’s Seis Conciertos de dos organos obligados are most definitely works for two harpsichords. All but one made up of a moderate-paced movement of courtly bearing followed by a Minué and variations, they were probably composed around 1770 for Soler to play with his evidently talented pupil the Infante Don Gabriel de Borbón, and with their impeccably equal parts, quick interchanges between phrases and numerous opportunities for ornamentation both instructive and competitive, they were surely intended to be great fun to play.

They make pleasant listening too, showing that elegant poise and sometimes dark Spanish colouring in which Soler can even outdo Scarlatti, as well as a good smattering of the fast stuff; No 2, the only three-movement piece here, covers most of these bases, with an opening Andante of sensitive melodic profile and rich harmonic turns, and a central Allegro that gives the fingers an athletic workout. Some, however, may feel that they have been delighted enough by the time the sixth concerto has come around – and perhaps only two heads-down harpsichordists would relish every variation and repeat in the minuets.

Still, the enjoyment of the players on this recording is both evident and infectious, with the stereo separation just right for enabling the ear to pick out the musical compliment-sharing. The perfectly matched harpsichords are copies of the kind of Florentine 18th-century instruments that were much in favour in Spain (pity there is no photo of them in the booklet), and combine a pungent sound and plenty of bass with the quick delay and clarity needed to let light into music in which they both play most of the time. Nice and unusual music then, and if it is not likely to change your life, it is hard to imagine it being better done than here.