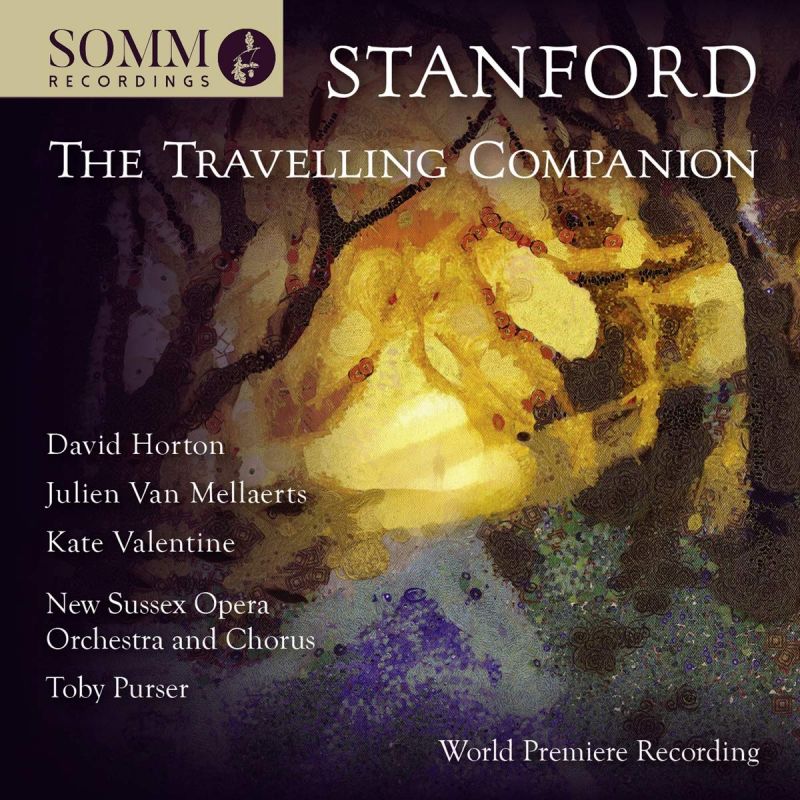 This is a landmark: the first full-length commercial recording of any of Stanford’s nine completed operas. It’s all the more remarkable in having been brought about by the semi-professional New Sussex Opera, who last year revived The Travelling Companion for the first time in decades. It should be said at the outset that with a fine professional cast, and generally proficient, idiomatic orchestral playing under the conductor Toby Purser, it’s a very decent recorded operatic debut for Stanford, and enthusiasts – and the curious – are unlikely to be disappointed.

And it’s well overdue. Stanford was no operatic also-ran; his earliest operas were performed in Germany and his comedy Shamus O’Brien toured successfully across the UK at the turn of the century. The Travelling Companion, dating from 1916, is his last opera and, according to Jeremy Dibble’s booklet notes, it’s his masterpiece – a statement which few living individuals are in a position to contradict. It’s a fairy-tale opera, based on Hans Christian Andersen. A princess under a malevolent enchantment tests her suitors, Turandot-like, with a deadly riddle. But after an act of kindness, the opera’s wandering hero John acquires an otherworldly Travelling Companion, who decapitates the wizard responsible and breaks the curse with a cry of ‘God save us all from goblins!’

That’s probably the weakest line in Henry Newbolt’s libretto; elsewhere, Newbolt gives Stanford an effective framework to do what he does best: spinning lyrical, luminous melody, interspersed with highly effective choral writing and lit by the occasional flash of orchestral magic. No one goes to Stanford for shock value, and it’s a gentle, often wistful score: Stanford’s watercolour Wagnerism and Mendelssohn-like woodwind-writing are no match for the story’s occult and erotic aspects. Perhaps, amid the unfolding tragedy of 1916, it was the idea of friendship beyond the grave that spoke most deeply to the 64-year-old composer; certainly the scenes for John and the Companion are the most affecting. Their last farewell is deeply touching: you can hear why Tippett rated this opera so highly.

David Horton is an ardent, youthful-sounding John. Julien Van Mellaerts as the Companion is slightly cooler in expression, but both can carry a melodic line and the two play beautifully off each other. Kate Valentine’s rich-toned, ardent Princess sounds splendid, too, against Ian Beadle’s Wizard: a ringing, pleasingly dark reading of a role that could easily slip into pantomime. Everyone here is entirely committed, though the enthusiastic amateur chorus, with its infectiously catchy ‘Morning Glory’ refrain, is distinctly hit-and-miss, and the orchestra, too, nearly comes unstuck in the demonic Act 3 interludes.

That this matters so little is down once more to the conductor Toby Purser, who sounds like he’s been conducting Stanford operas for decades, so eloquent is his phrasing, and so naturally does he let the music blossom and soar. A full libretto is included and this recording – a true labour of love – should whet a lot of appetites. Anyone for Shamus O’Brien?