STEFANI The Supposed Miracle or Cracovians and Highlanders 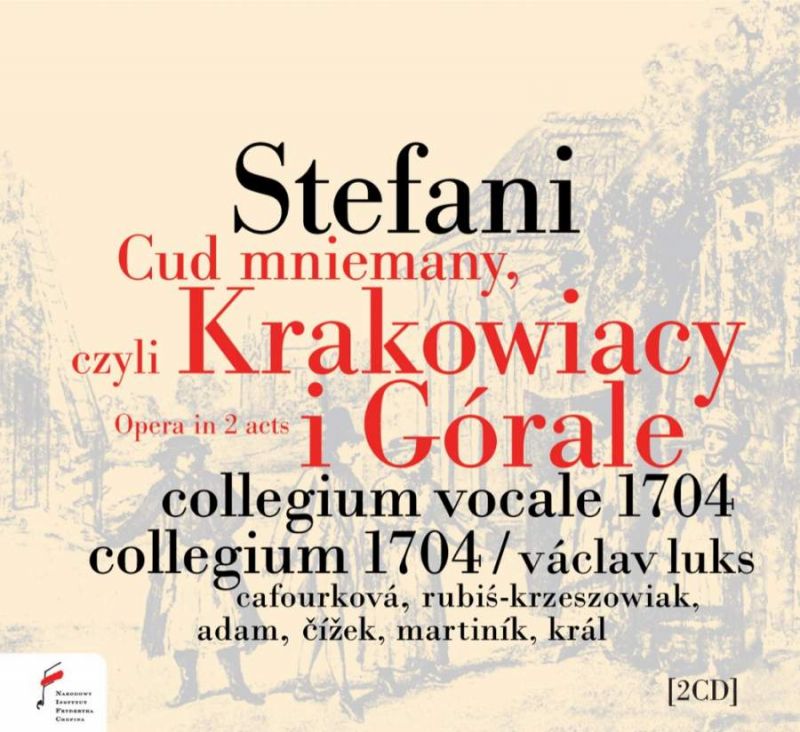 The Supposed Miracle, or Cracovians and Highlanders (Cud mniemany, czyli Krakowiacy i Górale) was first performed Warsaw in 1794. Its librettist was the playwright and actor-director Wojciech Bogusławski (1757-1829), one of the founding fathers of Polish theatre, though its composer, Jan Stefani (1746-1829), a violinist in the court orchestra of King Stanisław August Poniatowski, hailed originally from Prague. At its premiere, weeks ahead of the Kościuszko Uprising against the Second Partition of Poland, the work’s demand for the creation of a national identity through adherence to traditional culture was deemed inflammatory; but by the time it was banned, after only three performances, its impact had been significant. Kościuszko’s supporters whistled Stefani’s melodies in the streets. Bogusławski was forced into exile, though Stefani remained in Warsaw, where he eventually became Kapellmeister at St John’s Cathedral. In Poland, the work is still regarded as one of the country’s great national statements, though little has been heard of it elsewhere.

It’s set in a village near Kraków, and deals with the lovers Stach and Basia, who are prevented from marrying by Basia’s promiscuous young stepmother Dorota, who has her eyes on Stach herself and is consequently determined to push ahead with Basia’s arranged marriage to the Highlander Bryndas. Into this emotional contretemps wanders Stach’s friend Bardos, a physics student from Kraków University, to whom the lovers turn for help. His solution to their problems involves electricity, which the villagers and Highlanders regard as miraculous (whence the title), but crucial to the work’s development is Bardos’s growing affection for the villagers themselves, which finally prompts him to abandon physics and remain among them.

The work is a Singspiel, in the literal sense of a play with songs rather than an opera per se, and its principal drawback is that the numbers are brief and the dialogue too extensive. But the music, when we get to it, is captivating. Mozart’s influence is readily apparent, though much of the melodic material derives from Polish folk music, which Stefani, pre-empting so many later composers, collected on forays away from the capital. Many of the solo numbers are strophic songs, though uppity Dorota is given a grand da capo polonaise, while Bryndas, who really fancies himself, extols his charms (‘I’m a hunky, handsome jock’, the translation reads) in a flashy krakoviak. Bardos, the reconciler, sings hymnic ballads, and there’s a wonderful ritual wedding chorus, which contrasts the groomsmen’s impatience with the bridesmaids’ sorrow at the bride’s impending loss of both freedom and virginity.

Exhilaratingly conducted by Václav Luks, this new recording uses a Czech choir and orchestra, Czech and Polish soloists, and a group of Polish actors for the dialogue. Speaking and singing voices don’t always quite meld: Natalia Rubis´’s spirited, Susanna ish Basia, for instance, doesn’t really square with Anna Cieślak’s earthy delivery of the text. But the acting is consistently polished, and there’s some lovely singing. Krystian Adam makes a handsome-sounding Stach, his dreaminess nicely contrasted with Václav Čižek’s forthrightness as his pragmatic friend Jonek. Lenka Cafourková has fun with Dorota’s polonaise, while Jan Martiník swaggers sexily as Bryndas. Playing and choral singing are exemplary and spirited. You may or many not like the barrage of sound effects – a mill race, birdsong, bleating sheep, and so on – that accompanies the dialogue, though the recording itself is admirably spacious and perfectly balanced.

STEFANI The Supposed Miracle or Cracovians and Highlanders

The Supposed Miracle or Cracovians and Highlanders