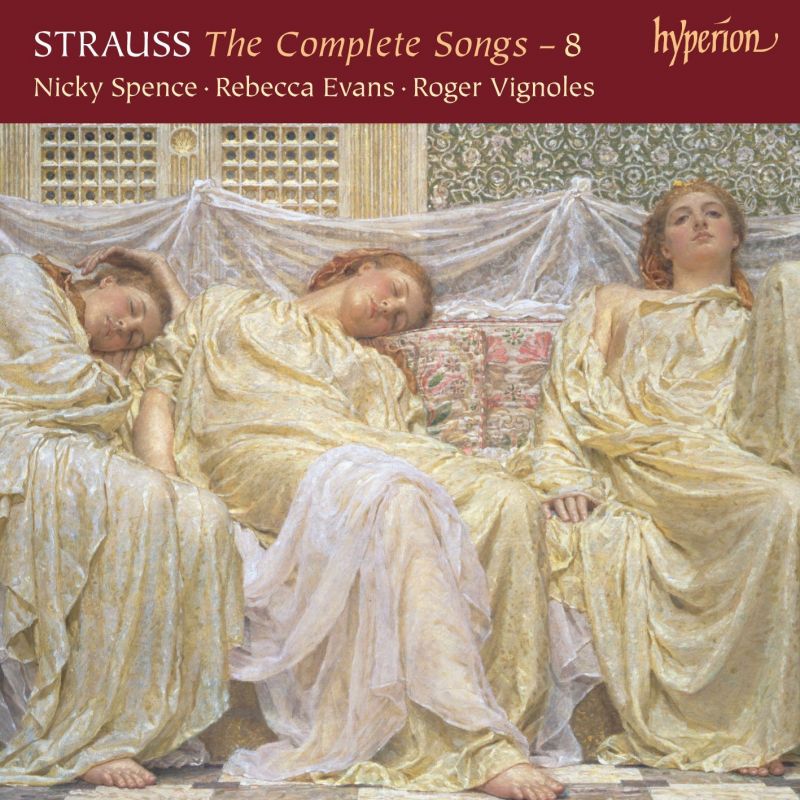 Roger Vignoles starts his characteristically engaging booklet note for this final volume in Hyperion’s Strauss song survey with an explanation about what might seem an unexpected inclusion. But he makes no apology for his decision to crown the series with the Four Last Songs in their piano arrangement (that for ‘Im Abendrot’ slightly beefed up by Vignoles). It turns out to be a generous bonus of a very welcome sort.

These versions are obviously no replacement for the famously complex and dappled orchestral accompaniments of the originals, and Vignoles happily admits as much. But the gains in immediacy and intimacy of these reductions bring their own rewards, and Rebecca Evans, a couple of moments of discomfort notwithstanding, makes a supremely eloquent and musical case for them. It’s perhaps not quite on the same level as Barbara Bonney’s recording on Decca, where Malcolm Martineau seems to me to do an even more persuasive job with the piano reductions, but it’s a deeply touching, moving performance.

Most of the rest of the music here is clearly not on the same exalted level – Strauss left a big barrel of songs, which such an undertaking as this cannot leave unscraped. We kick of with the marvellous ‘Cäcilie’, though, and the five Rückert Lieder of Op 46 are fine, serious works – ‘Morgenrot’ is beguiling, and there’s a seductive sense of expansive lyricism to ‘Ich sehe wie in einem Spiegel’. ‘Der Pokal’, composed in 1918, strikes a passionately internationalist and conciliatory tone, and the 1899 Klopstock setting ‘An Sie’ comes across as a gentle gem, especially when flanked as here by much that tends towards being strenuous and overwrought.

Nicky Spence is superb. The voice has recently grown to encompass more heroic roles and we hear that in this selection, in the bright, lively tone and ringing top – not always sounding totally settled, but exciting nonetheless. He deals heroically with Strauss’s more outrageous demands and, perhaps most importantly, he has just the right interpretative keenness and enthusiasm to put a persuasive case for everything he sings here.

I have a few quibbles with some of Vignoles’s assertions in his note (the period between 1901 and 1919 doesn’t cover ‘virtually all of Strauss’s operatic output’, for example) but he offers tireless, engaged and eloquent support throughout. His high-quality playing has been a constant in a series that – much like Strauss’s own song output – has had its ups and downs, but which also finishes on a high.