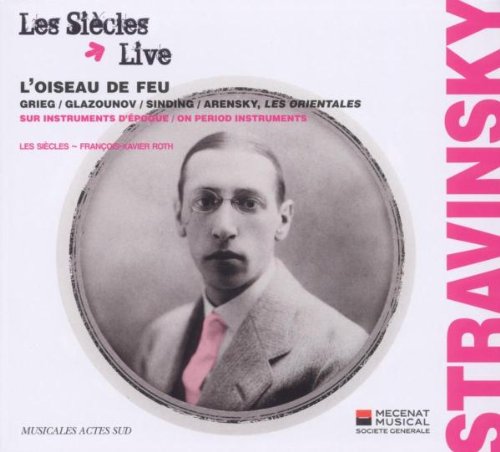 Les orientales was a potpourri of quasi-oriental dances assembled by Diaghilev (for, among others, Nijinsky and Karsavina) in Paris in 1910 with music and orchestrations by various hands. It is played here with suitable flamboyance. And The Firebird was, of course, the great ballet sensation of that year. It is played here with a difference. The intention is for it to sound as it did to those first, dazzled Paris audiences. The booklet-note describes at length how immense trouble has been taken to revive or reconstruct instruments of the period, arguing, for example, that ‘Stravinsky wrote with the particular tonal qualities of narrow-bore French trumpets and trombones, the valve horn and piquant woodwind instruments clearly in mind’. All the usual ‘authenticity’ questions are raised about how much this really guided him. One point: the French style of horn-playing was probably then already developing what performers liked to call a silvery shimmer (something the Russians copied), and which later went out of fashion as excessively wobbly vibrato. When I heard Stravinsky conduct the Firebird Suite in London in 1965, he certainly did not insist on that being revived. It is not revived here, nor would one wish it to be. The beautifully played horn solo in the final movement sounds right with minimal vibrato.

What we do have is an excellently played, brightly recorded performance of the ballet, conducted with verve by François-Xavier Roth. Certainly the orchestra has a clarity which gives a well-lit quality to Stravinsky’s Rimsky-Korsakovian orchestration, his model, and there is no lack of vitality with movements such as Kashchey’s dance. Well worth hearing.