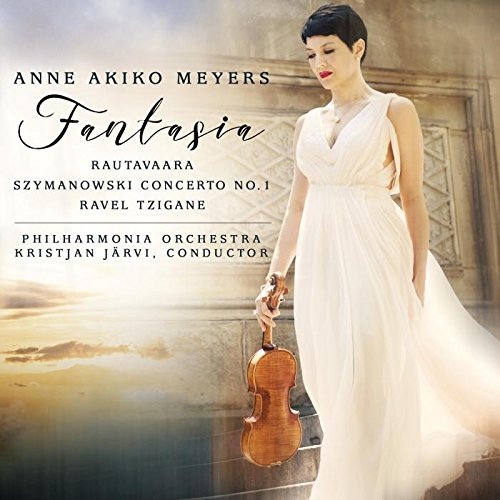 There are elements of fantasy in both Karol Szymanowski’s heady Violin Concerto No 1 and Maurice Ravel’s Tzigane, but the title of Anne Akiko Meyers’s new disc on Avie refers to what turned out to be Einojuhani Rautavaara’s penultimate orchestral work, Fantasia. Meyers commissioned this concertante piece in 2014 and recorded it just two months before the Finnish composer’s death in 2016.

Fantasia is typical of Rautavaara’s late style: lyrical, mystical and slow-burning. There’s great serenity to Meyers’s violin line, floating above rippling strings and arpeggiated woodwinds. It’s not music that’s in any hurry to reach its destination … if indeed it knows where its destination lies. Halfway through its 14 minutes, the brass are stirred from their slumber, but it’s a momentary awakening. Inevitably one thinks of Finnish landscapes and wide-open spaces where time stands still. It’s not instantly memorable music but beautiful nonetheless.

Earthy and rhythmic, Tzigane is everything Fantasia is not. Meyers tackles the long opening cadenza with sensitivity and is a touch too polite for Ravel’s fiery gypsy. There’s plenty of style to her playing, though, and her closely recorded pizzicatos pop and sizzle.