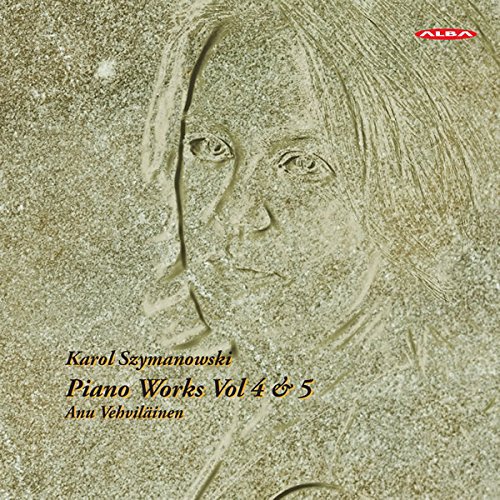 Karol Szymanowski was neither one of the 20th century piano-virtuoso-composers on the model of Bartók or Prokofiev nor an ardent self-publicist of Stravinsky’s ilk. For the longest time, if one were curious about his piano music, one had recourse to the recordings of his compatriots, Rubinstein and Małcużyński, and little else. Gradually others came aboard, Richter in the 1950s, then more recently, a veritable groundswell including Anderszewski, Hamelin, Pöntinen, Tiberghien, Jones, Roscoe, Fialkowska, Blechacz, Lortie and many others both inside and outside Poland.

Among those for whom recording a few pieces or a single opus was insufficient, and who resolved to record all the piano music, is the Finnish pianist Anu Vehviläinen. Vols 4 and 5 of her series include works from each of Szymanowski’s style periods: the first from 1900 until 1913; the second roughly coinciding with the First World War; and the third from his relocation from Ukraine to Warsaw up to his death in 1937.

It has become a commonplace to observe that from within Szymanowski’s piano sonatas, a symphony struggles to emerge. In the case of the earliest of his three surviving sonatas, that ‘symphony’, harmonically speaking, has a great deal in common with Brahms. Vehviläinen copes resourcefully with its thicket of over-written textures, replete with double glissandos and multi-voiced trills. It may be, however, that her intrepid pianism is shown in its best light in two of the four books of the Op 50 Mazurkas, which contain some of Szymanowski’s most characteristic and mature writing for the instrument. She is also persuasive in the two early sets of Variations, Opp 3 and 10, in which the original voice of the composer is fleetingly heard amid allusions to Chopin and Scriabin.

Variations on a Polish folk theme