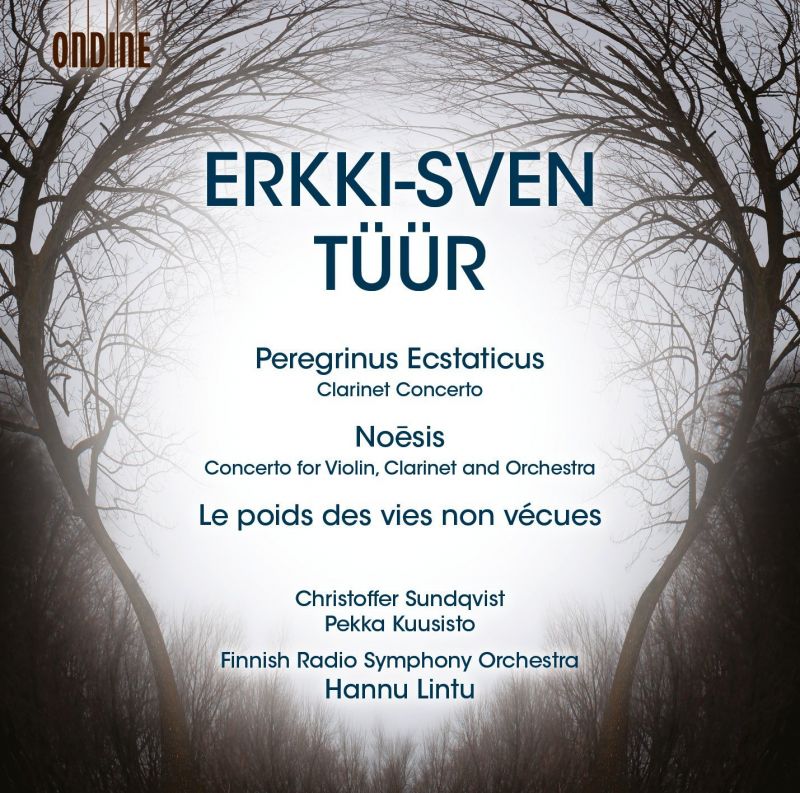 It is Erkki-Sven Tüür’s tight control of material and form that frees his notes up to have such impact. The concerto for violin and clarinet Noēsis (2005) charts ‘the slow but continuous integration of different elements, so that they finally form a new inseparable substance’. That quote from the composer is actually printed in the booklet for ECM’s recording with Carolin and Jörg Widmann under Anu Tali.

No prizes for guessing that this performance from Pekka Kuusisto and Christoffer Sundqvist is altogether more foregrounded, with more character, snarl and bite and therefore a greater sense of clarity to support the structural outline: the opposition of those elements (scales from the soloists) and their eventual agreement. Things may be clearer on this newcomer but it’s a mark of the piece’s quality that the Widmanns’ very different approach is still a joy to listen to.

Tüür’s newer clarinet concerto Peregrinus ecstaticus (2012) is similarly taut, juxtaposing two groups of material that circle around one another until you realise something bigger, perhaps derived from those ideas themselves, is in control. Or perhaps you don’t. It’s fine just to marvel at Tüür’s organic and dynamic use of texture – of which I could list countless examples, but the most obvious is his conjuring of extraordinary low sounds – and his control of the resulting energy, which surely owes a little to Magnus Lindberg.

In Les poids des vies non vécues (2014) Tüür reveals his Baltic soul most clearly. This ‘small Requiem for those whose lives have been disrupted’, which treads downwards in the manner of a lament, is not a filler but a deeply moving interlude. Hannu Lintu’s Finnish Radio SO show their class in all three performances, each full of considered phrasing, deep listening and impressive agility (the same can be said of the soloists). Tüür is blossoming into a composer of true significance. Go listen.