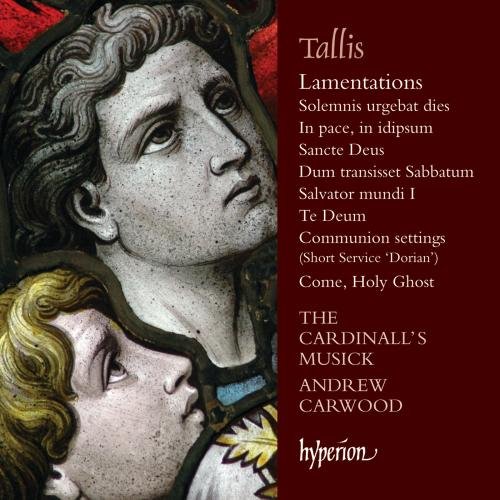 This final volume of Tallis from The Cardinall’s Musicke continues the fine form of its predecessors. Their interpretation of the English-texted works shows how effective these contrapuntally unassuming settings can be when sung with conviction. This is true of the Dorian Short Service and especially the two psalm tunes, here divested of sanctimonious overtones. Like the Dorian Short Service, the Te Deum is a compact setting, a masterclass in dispatching a longish text with maximum rhetorical efficiency. Only in the final invocation does Tallis allow himself an extended point of imitation, bringing the work to a robust conclusion. The relatively dry acoustic of the Fitzalan Chapel, Arundel Castle, seems to encourage this approach.

The disc’s main attraction, however, is the famous pair of Lamentations, which boasts a substantial discography. Carwood opts for a couple of (male) voices to a part, and for those who find single voices offer an insufficiently monumental sonority, these readings may well top the list of possible alternatives. For myself, a touch more of the hard-nosed approach just mentioned in connection with the English-texted settings (or The Cardinall’s pugnacious Byrd Masses, for example) would not have gone amiss. The marked change of tempo before the concluding ‘Jerusalem’ injunction of each setting is an enshrined performance habit that can be challenged (as the one-to-a-part reading from the Taverner Consort demonstrates) and arguably deserves to be. That the ensemble play things far safer in the Latin-texted pieces than in the vernacular ones doesn’t however detract from a splendid series, the most comprehensive survey of Tallis since the Chapelle du Roi’s (Signum) and consistently the more accomplished.

Not every one that saith unto Me