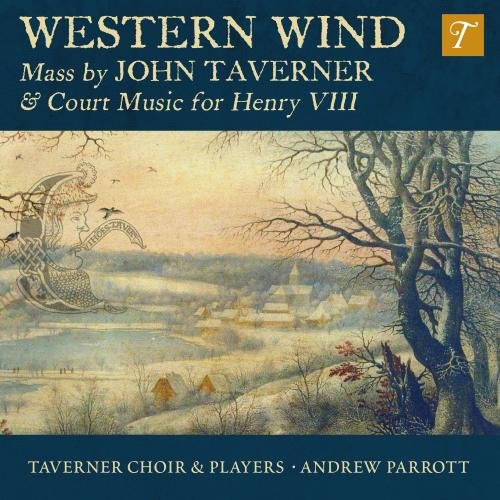 Andrew Parrott’s past recordings of Taverner count among his finest achievements, and it is little short of scandalous that they have never been reissued (glad to have got that off my chest!). While we wait, this new offering suggests that the hiatus of 25 years has not dulled his affinity for the music of his ensemble’s namesake. And yet it is a very different sort of disc from those earlier, exclusively liturgical projects. Taking his cue from the secular cantus firmus of this recital’s centrepiece, Taverner’s Western Wynde Mass, Parrott turns his attention to the secular music of Taverner’s contemporaries, not least Henry VIII, whose setting of the ‘T’Andernaken’ tune is one of his most accomplished compositions.

As one might expect, the cast is almost entirely different, though Emily Van Evera and Charles Daniels guest in a few numbers, such as Cornysh’s wistful Yow and I and Amyas. From a discographic standpoint, the instrumental numbers are very valuable, and dispatched with real flair. I particularly enjoyed Cornysh’s Fa la sol, an extended untexted fantasia performed here on the mute cornetto, vielle and bray harp.

The Western Wynde Mass nicely contrasts with The Tallis Scholars’ recording, being incisive and brisk where Peter Phillips’s reading is smoother and more leisurely. Parrott is perhaps more persuasive in conveying its pacing, which runs through what seems on paper a forbiddingly severe formal plan; in the process he highlights Taverner’s virtuosity in overcoming his self-imposed challenge. But perhaps the disc’s most satisfying interpretations are the two responds for high and low voices respectively, Audivi vocem and Dum transisset sabbatum (I), which seem to me on a par with the Taverner Consort at their very best: the latter in particular combines that trademark incisiveness with superlative solo singing. Finally, the sound recording successively juggles a wide range of distributions, from harpsichord to choir, with no apparent discontinuity.

Where be ye my love?

O blessed lord, how may this be

Yow and I and Amyas