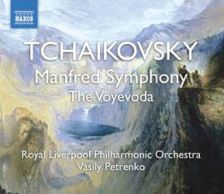 Petrenko’s Manfred emerges from the gothic greys of the opening wind chorale to vent his heartache in an emotive surge of string sound. And to ensure that we’ve grasped the measure of his despair, he repeats himself. Petrenko’s Byronic petulance makes something really stirring of the self-loathing – Tchaikovsky’s as much as that of Byron’s anti-hero. But the real miracle of this first movement is the vision of idealised love emerging so tenderly in what one might normally call the development. The palest clarinet against muted tremolando strings takes us directly to the heart of the matter, and Petrenko and his orchestra don’t disappoint. Likewise in the epic coda, where anguish is again writ large in overreaching horns and trumpets. No superfluous tam-tam, thankfully.

The dazzling apparitions of the second movement’s light-catching waterfall are sharply etched, and if Petrenko has a rather leisurely idea of what constitutes Andante con moto in the third movement, he can’t be blamed for loving this vintage Tchaikovsky melody too much. The playing, again, is lovely. Petrenko also keeps his head in the inferno of the finale, emphasising Tchaikovsky the classicist in the hard-working fugue. The “phantom” organ, though impressively caught here, gets no better, but is quickly forgotten amid the serenity of the final pages.

The opening pages of The Voyevoda seem to suggest a psychological summit meeting between Manfred and Hermann from The Queen of Spades. Its galloping obsessiveness ratchets up the torment again. The bass clarinet gives everyone the evil eye; no wonder Tchaikovsky tried to destroy it. This is impressive – and, at Naxos’s pricing, not to be missed.