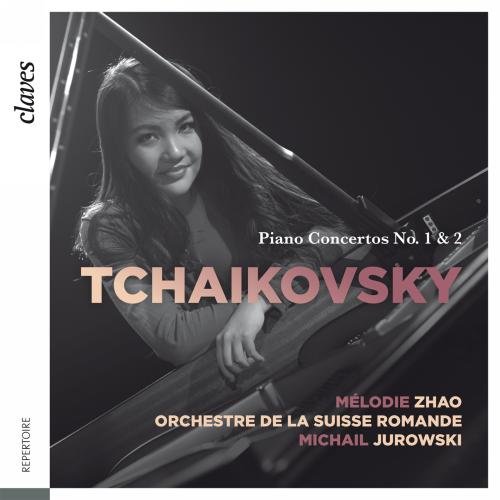 The unusual trajectory of Mélodie Zhao’s recording career began with a set of Chopin Etudes, recorded when she was 13, and has progressed through Liszt’s Transcendental Etudes and a complete set of Beethoven sonatas. Now, at 21, Zhao has made her first recording with orchestra, the august Orchestre de la Suisse Romande under Michail Jurowski, in the first two Tchaikovsky concertos.

It should be said up front that the Suisse Romande sound magnificent, their historical affinity for Russian scores heightened under Jurowski’s adept leadership. In the G major Second Concerto, given here without Siloti’s cuts, concertmaster Bogdan Zvoristeanu and principal cellist François Guye create magic in the slow movement, a veritable piano trio en concertante. The woodwinds are superb throughout.

Zhao has a keen rhythmic sense and lacks neither speed nor power. One wishes, however, that her power were slightly more calibrated. Her sound is healthy but the default dynamic setting seems somewhere between a forte and a triple forte. Quiet passages are few and far between, seldom sustained and rarely tender. The wonder is how Zhao is able to maintain her stentorian delivery even against the orchestra’s most delicate pianissimo string pizzicatos. So uniform and unyielding a dynamic palette has implications for the shaping of phrases, with which Zhao is not much concerned in any case. Interestingly, the movements that seem to suffer most are the dance finales, which seem aggressive, punched and mindless. Overall, bereft of finesse, nuance, flexibility and recognisable lyricism, both concertos come off as strangely faceless and impersonal. Artistic performances of these concertos are plentiful and choices of favourites personal; unfortunately this disc is not in the running.