TCHAIKOVSKY The Queen of Spades (Jansons) 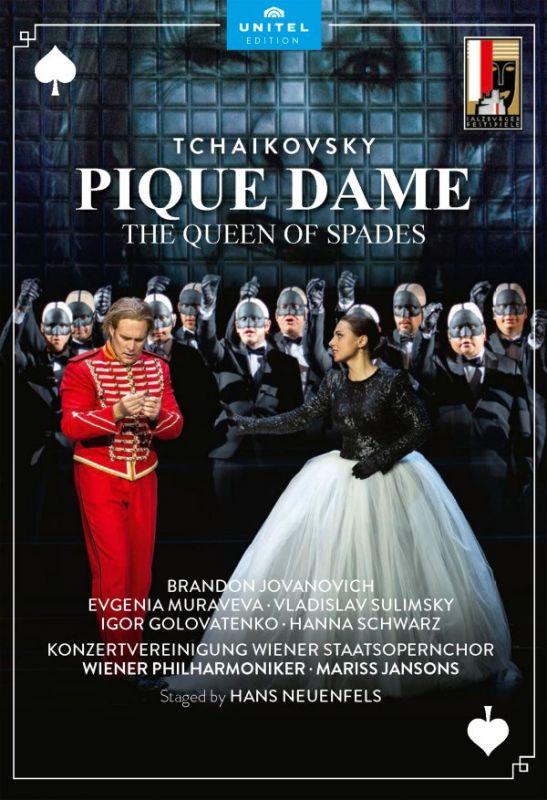 Mariss Jansons has played many hands of The Queen of Spades. Within the past decade alone, the Latvian conductor has recorded Tchaikovsky’s psychodrama with the Bavarian Radio Symphony Orchestra and led performances at the Dutch National Opera with the Royal Concertgebouw that were recorded for DVD/Blu ray. Now comes another production taped for the same format from the 2018 Salzburg Festival.

Why did Jansons roll the dice again? Well, the Vienna Philharmonic probably sweetened the deal. They are the aces in the pack here and play with silken elegance, particularly those walnut-toned strings. Jansons’s adoration for the music is clear, and the glitter and allure of the score is almost tangible. His languorous tempo choices, on the other hand, can err to the self-indulgent. This opera is a ghost story and a thriller (with a brilliant twist ending) but Jansons is not one to turn the screw.

If the music sounds sumptuous, however, it’s mostly gritty austerity on stage. Seventeen years after Hans Neuenfels created a local scandal in his Salzburg staging of Die Fledermaus, he returns with an emotionally neutral production. Christian Schmidt’s sets – mostly midnight blue and voluminous black – are the bare frame for costumes (Reinhard von der Thannen) that include Hermann’s toy-soldier uniform, mysteriously minus a shirt, fetish-style rubber and, for the women’s chorus, exaggerated saggy breasts. This is essentially a study of a society in decay, in which the lead characters seek only a way out. When Catherine the Great makes her cameo at the end of Act 2, she is greeted as ‘our tender mother’ but represented by a gaudy skeleton.

There is some striking imagery here but this opera demands a creepier seam, as well as some old-fashioned coups de théâtre. Neuenfels seems determined to avoid such splashy theatrics, which leaves his cast a little rudderless and makes the wide-open stage of the Grosses Festspielhaus look even more vast. Hanna Schwarz’s veteran Countess has the right raddled energy for the role and her death – utterly bald, she gratefully reaches for Hermann’s revolver – is suitably yucky; but there’s no real context for her character and her spooky return from the grave is underwhelming. Likewise, Evgenia Muraveva’s Lisa, who sings with impressive, even tone, is not supported by all the studied blankness around her.

There is more to get your teeth into from Brandon Jovanovich’s committed Herman, sung with surprisingly graceful suppleness (if pushed at times), and from Igor Golovatenko’s impassioned Yeletsky, much more than the usual princely patsy. Vladislav Sulimsky’s Tomsky provides decent support but his pivotal narration is under-energised. All in all, there is serious quality here but piquancy is what this Pique Dame is lacking.

TCHAIKOVSKY The Queen of Spades (Jansons)

(The) Queen of Spades, 'Pique Dame'