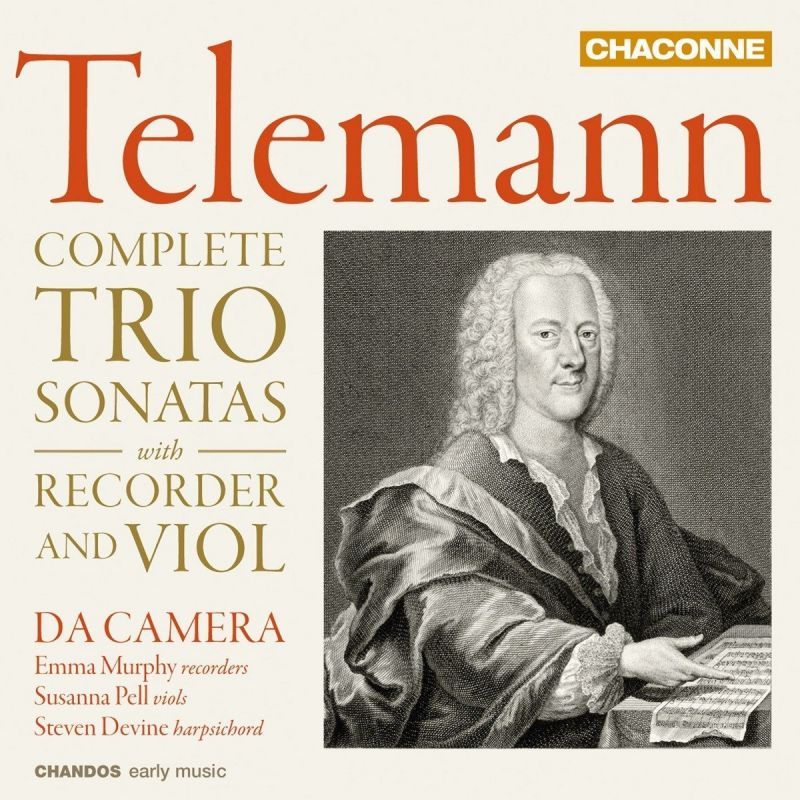 >‘How could I possibly remember everything I composed for strings and winds? I particularly devoted myself to the composing of trios … People even flattered me as having done my best work here.’ So wrote Telemann in his autobiography of 1740, and never were truer words said. He didn’t mention their limitless stylistic and emotional variation, which is very much on display in these immensely natural readings from Da Camera; a point worth making at the outset, because it’s possible that a goodly proportion of you might be mentally qualifying that promise of variety: ‘… well, for a collection of Baroque recorder-and-string trio sonatas, anyway, and frankly only then if you’re really paying attention …’

The trio sonatas collected here are plucked from two sources, four from Telemann’s Essercizii musici of 1739‑40 and four from the ‘Darmstadt manuscript’. With the latter, Da Camera have swapped the usually heard violin for the original scoring’s slightly lower-tuned treble viol, and Susanna Pell’s London copy of an instrument from c1630 reveals a lovely, subtly different and more mellow tone quality that beautifully complements the alto recorder timbre.

As for variety, there’s everything here, from Telemann’s traditional German contrapuntal style to his delight in Eastern European folk music and his adoption of the new ‘mixed style’; and Da Camera themselves hit every one of these nails on the head. Furthermore, it’s not all continuo work for Devine on his single-manual 1738 German copy, because not only does he get Essercizii musici’s Trio Sonata No 8, TWV42:B4 – one of the earliest instances of obbligato harpsichord-writing – but also the programme’s two bonus non-trio offerings, Fantaisies Nos 1 and 8 from Telemann’s 1732‑33 harpsichord collection.

To zoom outwards once more, the engineering itself wraps all the above in a church acoustic and a vibrantly near sound, Murphy’s three boxwood altos and boxwood voice flute slightly forwards, with Pell’s treble and bass viols a smidgen behind her, paired with Devine. A final nice touch is that we’re told that they’re tuned to 413Hz, typical for altos and voice flutes of the period, and also to Young II temperament (that’s six of the keyboard’s most commonly used keys’ fifths tuned just, and the other six 1/6 of a diatonic comma narrower); it’s this sort of loving attention to detail that pervades this whole package.