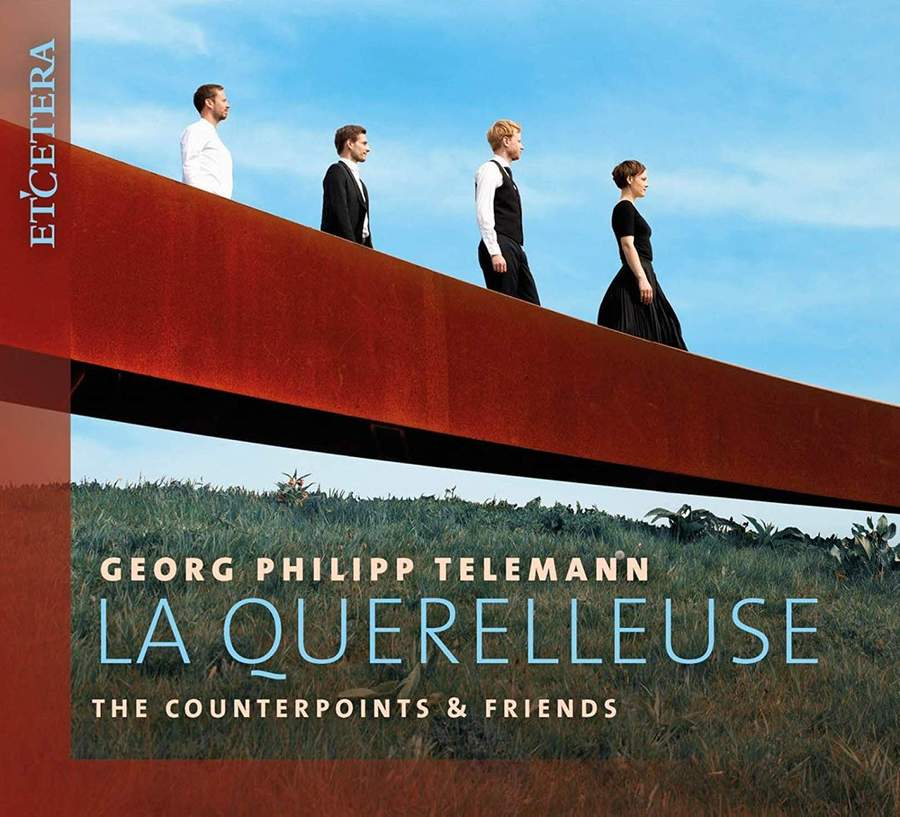 This debut disc is, hands down, some of the best recorded Telemann out there, and I am ready to go fist to fist with anyone who disagrees. The Counterpoints, joined by three ‘friends’ for the tracks with larger forces such as the wonderful cantata Die Zufriedenheit, bring an entirely fresh yet sensitive approach to Telemann’s solo and chamber music. Indeed, the disc teems with what must surely be the sounds of four people who simply love making music together: there is something wonderfully coherent and cohesive about their ensemble-playing.

Certainly, this can be attributed to education: the four musicians of The Counterpoints are united in the Dutch schooling of period performance, and all studied at some point at the Royal Conservatoire of The Hague. But there seems to be something beyond this too. Their sound abounds with youthful optimism, charged throughout with an intelligence and gestural integrity to Telemann’s notation that is not once acerbically applied. Any blemishes that I ascribe here are thus merely the traces of sheer pleasure I have had in being able to listen to this disc on unbridled repeat this month.

The structure, which alternates between Telemann’s chamber music and solo Fantasia movements (much like the recent release from Elephant House Quartet – Pentatone, 12/19), though not particularly unique, is well coordinated. Though all four musicians contribute stunning solo performances, Thomas Triesschijn’s Fantasia on recorder, an arrangement of the G major for solo flute, warrants particular praise. Triesschijn’s sound is beguiling, real edge-of-your-seat, ears-wide-open stuff. The short-lived Adagio is utterly tantalising (and at this point, praise must also go to the crack team of sound engineers and producers for exceptional quality throughout).

Most delightful is the group’s ability to plunge head-deep into a myriad of affective sound worlds with the slippery mystery of a criminal in the night. In the space of a bar line, we are taken from galant gaiety to penetrating gravity. In the central Largo of the Trio Sonata in G minor, TWV42:g9, Triesschijn’s arpeggiation possesses the quality attributed to mercy by Shakespeare’s Portia – ‘It droppeth as the gentle rain from heaven’ – or, as in the opening Affettuoso of the Trio Sonata in A minor, TWV42:a1, we can almost smell the storm on the horizon.

The Counterpoints draw out the sensuous in Telemann’s music, all the while with superb intonation and flairful phrasing. Violinist Matthea de Muynck makes a sumptuous sound on her Amati reconstruction, though her trills in some movements, such as the A minor Grave, are somewhat set on default mode (Triesschijn’s ornamentation in this movement is also slightly saccharine). Would Etcetera Records have engineered a booklet that contained the notes without their falling out upon opening, this would be an almost faultless object.

Fantasia for solo flute No 11

Fantasia for solo flute No 3

Fantasia for solo violin No 12