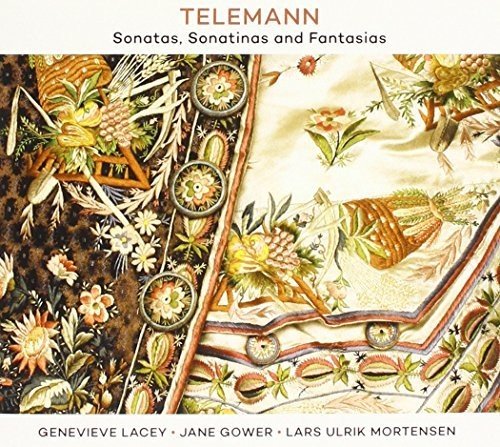 Just when you thought there might be a break in these pages from 2016’s steady flow of recordings marking Telemann’s 250th anniversary year, up pops another one. This was in fact released at the end of last year, and features a fine trio of Baroque players: the Australian recorder player Genevieve Lacey; fellow Australian bassoonist Jane Gower, who plays principal bassoon with period ensembles such as John Eliot Gardiner’s English Baroque Soloists and Orchestre Révolutionnaire et Romantique; and harpsichordist Lars Ulrik Mortensen, whose own titles include musical director of the European Union Baroque Orchestra and artistic director of Concerto Copenhagen.

I wish I hadn’t read the booklet-notes until much further into my listening relationship with this recording, because they’re a rather rum affair, more guaranteed to bemuse than tempt, with no musical or programming explanation. This is a shame, because there’s some lovely, natural playing across this constantly changing programme of different instrumental combinations. Unsurprisingly, the instruments are all Baroque copies; particularly worth knowing is that Mortensen’s double harpsichord is after a model by Ruckers, the 18th-century Flemish kings of harpsichord manufacturing, and it is as resonant and crisp as one would expect. Also, Lacey’s choice for the solo Fantasia in E major, TWV40:10, is a maple voice flute (an instrument sitting between the alto and tenor recorder sizes), and the combination of this size and soft wood makes for a perfect tonal complement to her gentle reading.

While I wouldn’t say that I found any epiphanies here, it’s all very elegant and thoughtful. So if you’re after some wind-shaped Telemann chamber music, then go for it.

(12) Fantasies for Flute without Continuo