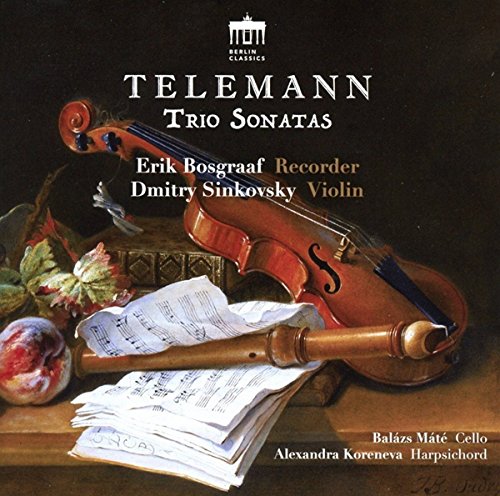 Look down the recording details at the back of the average CD and it’s rare to find the hour of day listed alongside dates and venue. However, time has been included here, and you can see why when it reads, ‘Recorded during the late nights of July 3 and 4, 2016, at the chamber music hall of Eszterháza Palace’. In other words, the warmly characterful space in which we’re hearing some of the music Telemann himself was most proud of is the deserted palace at the witching hour. Pretty atmospheric, no? In fact I’d even go so far as to say that such knowledge does actually enhance your listening experience.

The pleasures of this album by no means stop at atmospheric imaginings either, as one might expect from one of the most interesting and versatile recorder players on the scene, and indeed one known for his Telemann. For big-picture stuff, there’s the fluid freedom of his playing and the beautifully wide, airy sound he produces on his Meyer-made Denner and Jaillard copies. Then there’s the balance and mutual awareness of the partnering between him and Dmitry Sinkovsky, himself one of early music’s most interesting characters with his three-pronged career as baroque violinist, conductor and countertenor.

The programme also has added interest in musicologist Thiemo Wind’s new continuo parts to the Trio Sonata in D minor, TWV42:d10, replacing the manuscript’s unison-octave-heavy writing: crimes against the rules of counterpoint which have been used as proof this isn’t Telemann at all, but which this recording suggests are simply cack-handed doctorings of a now-lost Telemann original.

The ‘encore’ is great too: Telemann’s B flat duet TWV40:111 for solo recorder and violin, where in the Scherzando Sinkowsky turns a falling four-note idea into a joke by sliding down it, which Bosgraaf then mimics with his answering ideas, before the pair slide increasingly tunelessly downwards to the phrase’s end, petering out as they go, if they’d suddenly run out of batteries.

This may be Telemann at the midnight hour, but the performances are as fresh as 10am.