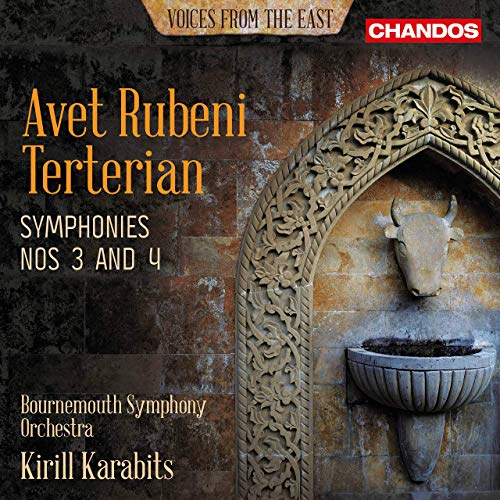 Avet Rubeni Terterian’s relatively early death in 1994 may not be the only reason we haven’t heard more of him. A composer from the geographical and stylistic margins of the old Soviet empire, his music is tougher than that of peers such as Sofia Gubaidulina or the recently deceased Giya Kancheli, a friend. Like Kancheli, Terterian relied a good deal on short-breathed rhetorical gestures and the shock value of extreme louds and softs, but his own ‘spiritual’ idiom comes without the aura of consolation. Chandos must be hoping its ‘barbaric’ folk-derived component will provide another way in. Melodic interlopers are placed between the main utterances on the present disc, performed by Tigran Aleksanyan and Vahe Hovanesian on a pair of unaccompanied duduks, cylindrical double-reed instruments with a shawm-like timbre.

A rendition of Terterian’s Seventh Symphony given at London’s Royal Festival Hall shortly before his death would seem to have been the first local airing for any of his music. Kirill Karabits’s live account of the Third at Poole’s Lighthouse (presumably its UK public premiere) followed as recently as March 2019. It’s a score he has championed elsewhere in Europe and about which he obviously feels deeply, adopting generally slower tempos and sharper dynamic contrasts than Loris Tjeknavorian and the Armenian Philharmonic (ASV, A/97).

Scored for a large but selectively deployed orchestra including extra horns, duduks and zurnas, this 1975 work feels like a creative response to the Armenian genocide for all that the booklet cites more personal memories. The first movement, led off by directionless timpani thwacks, is stark and unsparing. The second, by contrast, is barely audible, all post-apocalyptic lamentation. In the finale, a Lalo Schifrin-style riff is strafed by howling alarms before we arrive at the affecting reprise of earlier ideas, one final catastrophic gesture and a quiet fade. Whether or not such sparse, essentially static invention adds up to a masterpiece, it sounds very much at home on Chandos’s generous sound stage. Older hands may find the Bournemouth orchestra too polite.

Dating from 1976, the one-movement Fourth Symphony is more obviously ‘sonoristic’ and differently emotive, its preponderance of distinctly East European sound clouds framed by tintinnabular pinging. There’s a recurring role for nostalgic, Schnittke-ish harpsichord as well as sporadic resort to percussion-led protest. The score exists in two forms: Karabits opts for the original version, notated without bar lines. This most challenging of Chandos’s ‘Voices from the East’ is much more than a sonic spectacular, though it’s that too. There are annotations by Andrew Burn and reminiscences from the conductor himself.