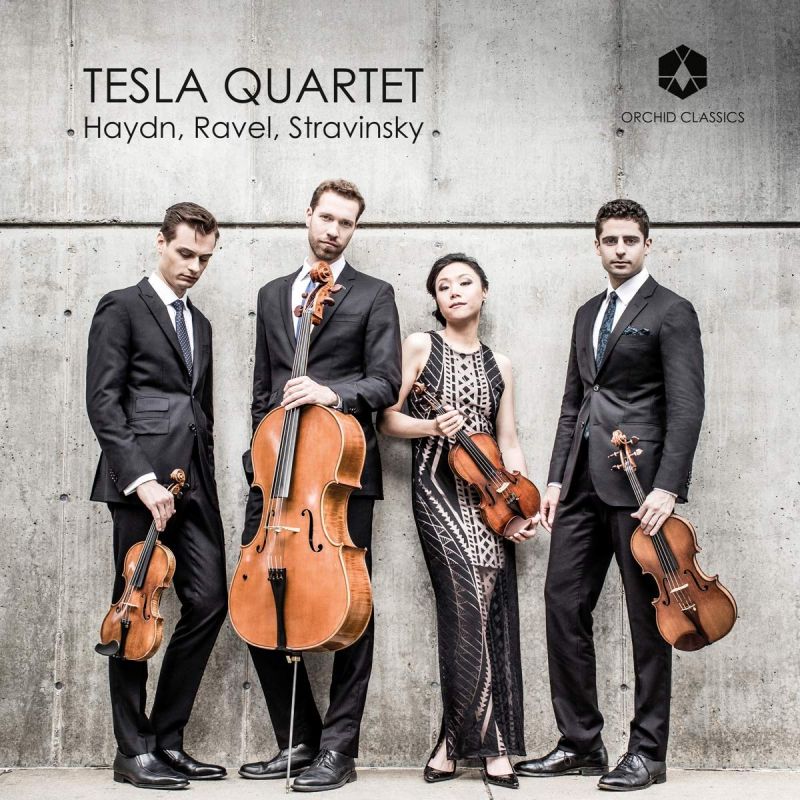 ‘Though free to think and act, we are held together like the stars in the firmament, with ties inseparable’, we read in the booklet for the New York-based Tesla Quartet’s debut album, quoting words from the Serbian-American inventor and engineer Nikola Tesla from whom the quartet take their name. The disc’s release also marks the 10th anniversary of their founding, and its programme is both delightfully quirky and personal. First violinist Ross Snyder tells us that hearing Ravel’s Quartet as a teenager inspired him to become a chamber musician, and he describes Haydn’s quartets, to which the Tesla have repeatedly returned over the years, as a ‘pillar of our artistic identity’. Stravinsky’s Concertino, he argues, shares its neoclassicism with Ravel and its inventiveness with Haydn. Each work is followed, meanwhile, by one of Snyder’s own transcriptions of three Ravel menuets, originally written for piano, though Menuet antique was later orchestrated.

They are indeed a fine ensemble, whose playing is admirable in its tautness of focus and refinement of detail. Form and emotion are nicely balanced in the Ravel Quartet, an interpretation that opens coolly but then proceeds to probe the complex undercurrents of feeling that lurk beneath the music’s fastidiously crafted surface. The pizzicato swagger at the start of the scherzo offsets the very real tenderness at its centre, and the agitation at the beginning of the finale seems all the more startling after the contained sadness of the slow movement. The Tesla darken their tone for Haydn’s Op 54 No 2, which, similarly, is beautifully controlled. Leader-driven, the work itself is almost a concerto in miniature. Snyder negotiates its difficulties with unshowy finesse, and is particularly good in the first Adagio, where the incantatory violin hovers over a slow chorale and time briefly seems to stand still.

Snyder also does fine things, meanwhile, with the big cadenza that forms the slow central section of Stravinsky’s brief Concertino in a performance that is all reined-in aggression and rhythmic exactitude. His Ravel transcriptions, however, aren’t always ideally successful, despite the elegance of the playing. Menuet sur le nom de Haydn and its fragmentary counterpart in C sharp sound wistfully nostalgic but Menuet antique loses much of its wit and nobility (the score is marked Majestueusement) when played by four solo strings. The recording itself is superbly engineered.