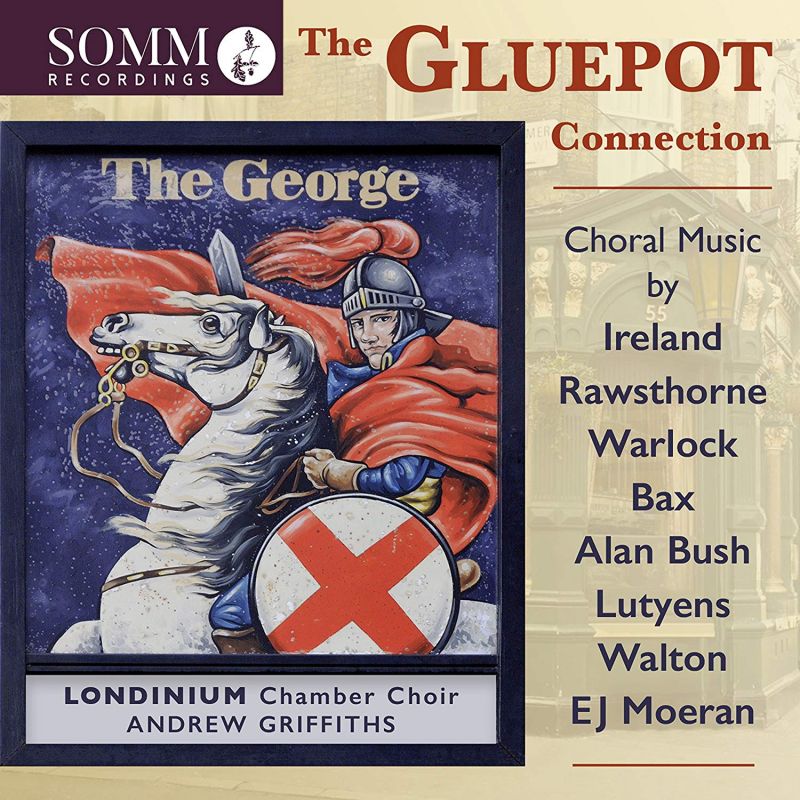 ‘That bloody Gluepot’ was how an infuriated Sir Henry Wood described The George, a bustling public house just round the corner from BBC Broadcasting House and the old Queen’s Hall, whose denizens once numbered many an orchestral player as well as the distinguished line-up of composers featured here. Andrew Griffiths has put together a generous and varied a cappella sequence, as nourishing as it is technically challenging, nowhere more so than in Arnold Bax’s towering Mater ora filium, which receives a reading of impressive accomplishment and no mean flair, if without quite outranking Ralph Allwood’s exhilarating and miraculously assured version with the youthful Rodolfus Choir (a genuine ‘must hear’ – Herald, 9/95). The same figure’s gorgeous I sing of a maiden also comes off very well, and how perceptively Griffiths and his responsive group quarry the depths of both John Ireland’s The Hills (which touchingly incorporates material from the slow movement of Elgar’s First Symphony) and Walton’s sublime setting of John Masefield’s Where does the uttered music go?.

Particularly welcome are the premiere recordings of Alan Rawsthorne’s Four Seasonal Songs (1956), and Alan Bush’s Lidice (1947) and Like Rivers Flowing (1957) – the former an especially powerful creation first given under the composer’s lead at the site of the eponymous Czech village obliterated by the Nazis. Elsewhere, Peter Warlock’s The Full Heart (completed in 1916 and revised five years later) mesmerises in its penetrating harmonic resourcefulness, as indeed does Delius’s lovely On Craig Ddu (which so bowled over the teenage Warlock when he heard it at Eton College); Elisabeth Lutyens’s sensuous Verses of Love (to words by Ben Jonson) enjoys superbly controlled advocacy; and it’s always a treat to encounter Moeran’s enchanting Songs of Springtime when they receive such ardent and fresh-faced treatment as here.

Excellently engineered by David Hinitt within the helpful surroundings of All Hallows, Gospel Oak, and knowledgeably annotated by Andrew Griffiths, this enterprising and imaginative Somm anthology strikes me as well worth seeking out.

On Craig Dhu (An impression of nature)

Where does the uttered music go?