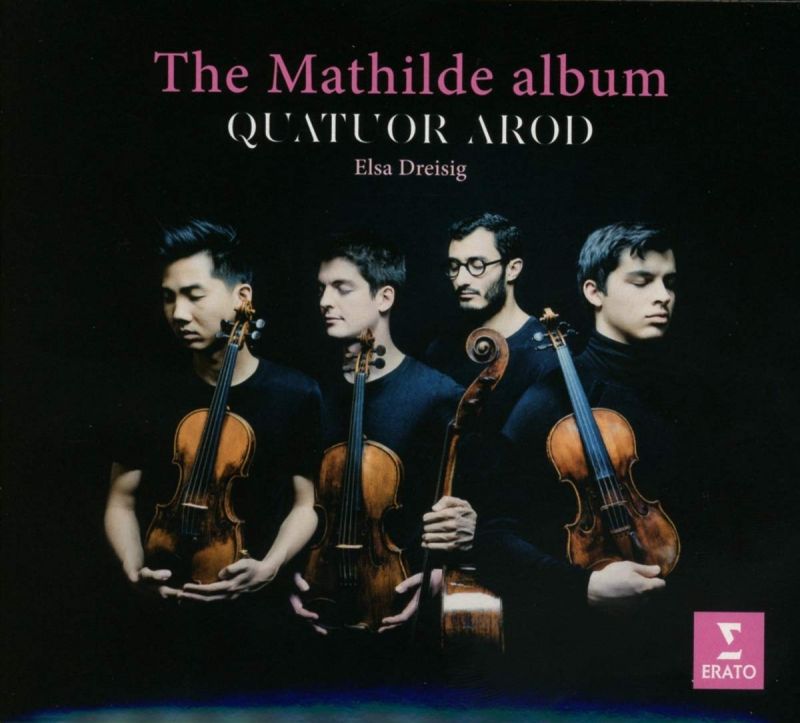 Come for the sex, stay for the music. That would seem to be the implication behind the title of the Arod Quartet’s album, referring as it does to Mathilde Schoenberg’s affair with the painter Robert Gerstl. It’s salutary to remember Mahler’s dedication of the Eighth Symphony to Alma, in the middle of her affair with Walter Gropius. Having won Mathilde back, Schoenberg did the same with the Second Quartet – on a fraction of the symphony’s scale but of inversely greater significance for posterity.

The devoted Webern put in a word for his teacher, and the album opens with a flexible and delicately shaded account of the Langsamer Satz which Schoenberg had set him as an exercise in 1905. The quartet employ a wider range of vibrato than on their fine debut album of Mendelssohn (11/17), including much expressively rich pure tone, yet the octaves and unisons are still breathtakingly clean, like mountain air, the soft playing (as at the main theme’s reprise, 5'55") exquisite, the evocation of place and space – in this case a flower meadow, walking with the cousin Webern would come to marry – deeply sympathetic.

There follows what would usually count as the main event on such an album, the Schoenberg, full of subtle rhythmic humour in the ironically folk-tinged Scherzo and more judiciously placed pure tone to contrast with the refined warmth of the ‘Litanei’, where close-miked detail and restrained phrasing hint at an unconsummated relationship with Verklärte Nacht. Set a little further back in the mix, Elsa Dreisig moves distractingly between channels but sings the George poem with exemplary diction and a chaste firmness of tone that leads well into the ‘other world’ of the finale.

I said usually. On this occasion the limelight is stolen from Schoenberg by Zemlinsky, who did not so much teach him as set him on his path to genius, and by a simply irresistible performance of his own, satisfyingly complex Second Quartet. Here the roles are reversed, and the Arod’s single-minded clarity of purpose allows us to hear Zemlinsky coming to his own terms with the harmonic discoveries of his reluctant and recalcitrant revolutionary. This music requires little excuse to become overheated, and it is much to the Arod’s credit that they resist the temptation to press the bow into the string until really decisive moments such as the orchestrally scaled climax to the first section (3'30") or the frenzied close to the scherzo section, which introduces an unmistakable quotation from Verklärte Nacht in a gesture of fulfilment typical of the proud but generous Zemlinsky. The coupling is as unique as it is insightful, and comparisons would seem beside the point: it’s an outstanding album.