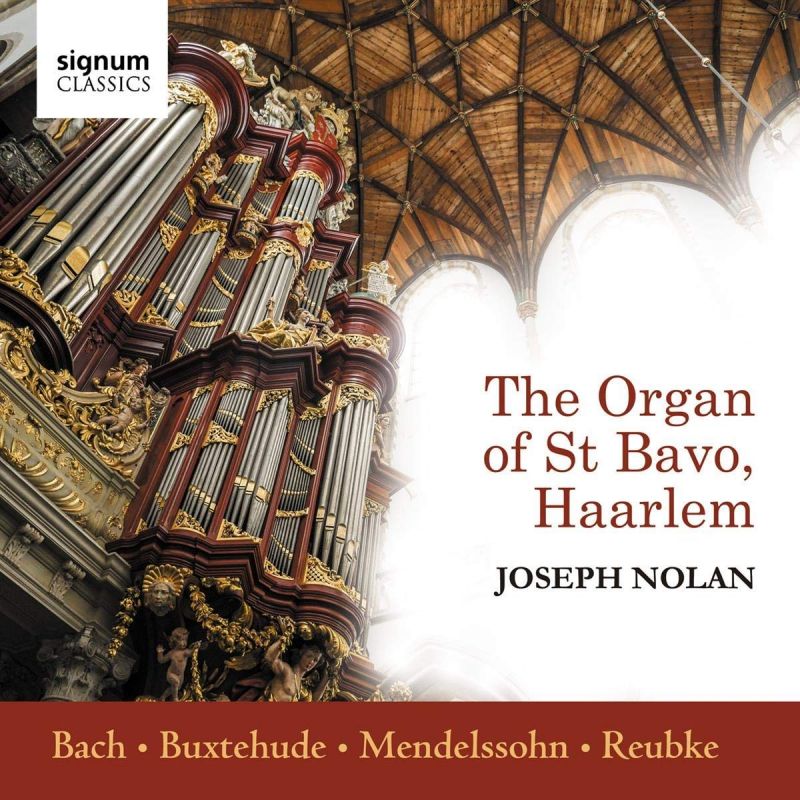 For his 10th Signum recording, Joseph Nolan travelled to Holland in 2017 to record on the renowned 1738 Christian Müller organ in the church of St Bavo in Haarlem. His all-Germanic programme puts this veritable giant through its paces, its lack of modern playing aids placing extra technical challenges upon the player. Mike Hatch’s engineering has caught perfectly the height of the building’s acoustic as well as some of the charming clonks and rattles from the organ’s action.

Henri Messerer’s 1909 arrangement of Bach’s D minor Chaconne makes a grand opening, displaying all the colourful majesty of this instrument, which has also been played by Handel, Mozart and Mendelssohn. Reverting to an original Baroque piece, Buxtehude’s F major Toccata and Fugue bustles along in a no-nonsense manner. By contrast, Nolan’s approach to Bach’s chorale prelude on Nun komm, der Heiden Heiland is imbued with a lingering, tender sweetness, nicely juxtaposed by the tripping Trio on Jesus Christus unser Heiland. This is Bach-playing of the highest order. Mendelssohn’s Sixth Sonata is given plenty of space, allowing the listener to savour fully the noble sonority of the instrument, the only criticism being that the pedal registrations in the first and second variations need a little more foundation.

All of the preceding music has been building up towards the bulk of Reubke’s exhaustingly Lisztian Sonata of 1857, one of the mighty ‘flying buttresses’ of the organ repertory. Nolan spins through the more bravura passages with a fiery brilliance, bringing this compelling disc to a triumphant conclusion. With helpful notes from Ateş Orga, this release is a wonderful accomplishment.

Sonata on the 94th Psalm