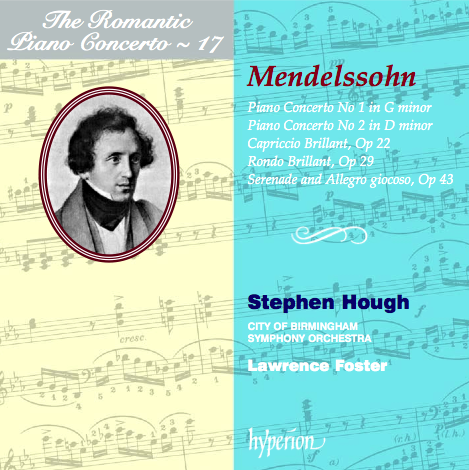 Looking at the list of contenders, you might think Stephen Hough faced impossibly stiff competition in the Mendelssohn concertos. But Andras Schiff, brilliant as he is, rarely sounds completely engaged, intellectually or expressively, and while Murray Perahia probes more deeply than Schiff, it’s in the three solo piano pieces Sony add as fillers that he reveals real love for Mendelssohn. There’s more affection and feeling for drama in Benjamin Frith’s versions of the concertos on Naxos – very appealing altogether, despite the occasionally percussive piano tone.
But with Stephen Hough we enter a new dimension. The soft, stylish arpeggios that open the first work on the disc, the Capriccio brillant, announce immediately that something special is on the way. But this is just a preparation for the First Concerto. Here again, ‘stylish’ is the word. One can sense the background – especially the operatic background against which these works were composed (Weber is very much present). The first solo doesn’t simply storm away, fortissimo; one hears distinct emotional characteristics: the imperious, thundering octaves, the agitated semiquavers, the pleading appoggiaturas. It’s far from overdone, yet after Hough Schiff seems merely impersonal, Perahia even a teensy bit mannered.
The revelation is the First Concerto’s slow movement: not a trace of stale sentimentality here, rather elegance balanced by depth of feeling. Yes, I did say depth – forget what you may have read about Mendelssohn’s ‘artificiality’. Some of the praise must go to the CBSO and Lawrence Foster; after all it’s the CBSO violas and cellos that lead the singing in that slow movement. And I also like the way Foster and the orchestra open the Second Concerto – too often dismissed as the less inspired sequel to No. 1. The first bars are hushed, sombre, a little below the main tempo, so that it’s left to Hough to energize the argument and set the pace – all very effective. I’m not sure the other two short pieces add much. I even marginally prefer Frith in the Rondo brillant – his sustained rhythmic drive makes this slight piece more compelling. But Hough is now clearly first recommendation in the concertos. If you still doubt that Mendelssohn could be possessed by genuine creative fire, discs like this, or the Carmina Quartet’s