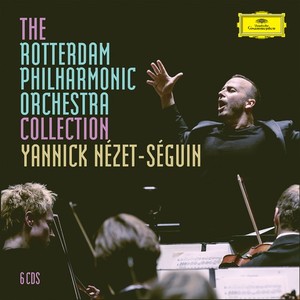 There’s definitely something to be said for having a musician select a personal choice of favourites among his or her own recordings, in this case live concerts that cover Yannick Nézet-Séguin’s residency with the Rotterdam Philharmonic (2008 18), 2018 also marking the orchestra’s centenary. We’ve already had a fine Nézet-Séguin Bruckner Eighth with the Montreal Metropolitan Orchestra (presented, as here, in the edition ‘1887/90 mixed versions, ed Robert Haas [1939]’), included as part of the conductor’s complete Bruckner symphony cycle for ATMA Classique (reviewed in my Box-Set Round-Up in July). This Rotterdam version is marginally quicker overall, with a coda that vies with Celibidache’s in Munich for visceral impact. The wonder of Nézet-Séguin’s Bruckner, especially in this particular work, is in its dynamic sweep and attentiveness to detail, its flexibility and appreciation of Bruckner’s harmonic boldness (particularly in the Scherzo and finale).

Mahler’s Tenth is another corker, although we’re not told exactly which Deryck Cooke performing version is used; I’m assuming it’s the one known as ‘Cooke III’ (ie slight revisions to the 1966 72 revision that Julian Haylock mentions in his excellent notes). The emotional vicissitudes in the first movement are captured with alarming accuracy, especially the terrifying ‘Edvard Munch scream’ beyond its centre (the two works are more or less contemporary). Both Scherzos work well, the second notably so, a sort of desperate last-ditch revisit to Das Lied’s opening ‘Das Trinklied vom Jammer der Erde’, whereas the bittersweet finale opens to explosive bass drum blows, its more tender passages played with disarming simplicity. Not every performance of this heroic ‘performing version’ delivers but Nézet-Séguin’s definitely does.

For me, however, the set’s highlight is a performance of Shostakovich’s Fourth Symphony – surely the composer’s greatest prior to the Eighth – that connects fully with its Mahlerian roots, its wit, anger, sense of protest and endless chain of invention all brought to the fore. This in my view is the one symphony where Shostakovich pays significant homage to the world of nature (part of its Mahlerian inheritance, you might say), with sundry birdcalls and the sorts of ‘night music’ frequented by Bartók. On Andris Nelsons’s brilliantly played new Boston Symphony recording (DG, 9/18), the effect of the first movement’s Presto section with its helter-skelter activity among the strings suggests prodding an ants’ nest into sudden activity, whereas Nézet-Séguin and his players are better at conjuring a sense of blind panic. The whole of the 20-minute closing Allegro becomes a bizarre world on its own, though the sheer welter of sound generated by Nelsons and his Bostonians is even more overwhelming.

Bartók’s Concerto for Orchestra is notable for strength of character, the ‘Giuoco delle coppie’ second movement displaying warmly blended brass (3'02"), the virtuoso finale light and joyful rather than fiercely driven. Bartók’s Concerto gives way to Dvořák’s Eighth Symphony, an engaging account with a frisky first movement and an affectionately phrased Allegretto grazioso third movement. The finale’s contrasts between earthy folk dancing and nostalgic reverie (ie towards the end of the work) are vividly reported, the symphony’s closing pages (9'08") racing the fast lane with heady abandon.

Two other highlights are Haydn’s masterly Trauersymphonie, whether in the relatively solemn mood of its first three movements or the urgency of its finale, and an exceedingly well-judged rendition of Debussy’s three Nocturnes, ‘Sirènes’ being skilfully balanced by both Nézet-Séguin and the DG engineers. The riotous centre of ‘Fêtes’ is perfectly paced, the preceding ‘Nuages’ charged with an authentic sense of atmosphere. Incidentally, being the last item in the set, the Haydn symphony is the only work to be tailed by applause.

Amazing how Marc-André Hamelin could make Mark-Anthony Turnage’s Piano Concerto – a Rotterdam Philharmonic commission with feistily virtuoso outer movements and a touching central lullaby for Henze – sound as if he’d been playing it for years. This recording is in fact of its world premiere (2013), and the performance fairly jumps out at you. The two performances that I would least care about holding on to for my personal collection would be a good if less than gripping account of Tchaikovsky’s Francesca da Rimini (in spite of a gorgeous clarinet solo) and Beethoven’s Eighth Symphony where, in the first movement, the bustling string figurations from 1'48" (just before the repeated exposition) are rather vague in outline. Francesca’s closing tumult needs more fiery projection than this, as on Bernstein’s last New York recording (DG), or the fabled Leningrad recordings under Rozhdestvensky (DG) and Mravinsky (Warner, Melodiya, etc). If viewed in any other context both performances would have more than passed muster; but, given the exceptional quality of everything else in the set, they rather fall short. In all other respects, though, this is a dazzling celebration of both the 100-year-old Rotterdam Philharmonic and one of the most gifted conductors currently performing. As such, I thoroughly recommend it.