THOMPSON The Mask in the Mirror 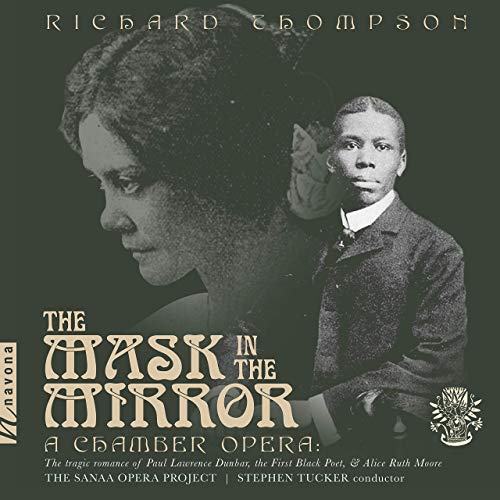 Richard Thompson’s chamber opera The Mask in the Mirror (2012) tells the story of the relationship between Paul Laurence Dunbar (1872-1906), the first African American poet of international standing, and Alice Ruth Moore (1875-1935), also a writer – but much less successful – and later his wife. Both were complex characters whose infatuation arose from lust, for the most part, in Dunbar’s case, and hero worship of the poet (rather than the man) on the part of Moore. Thompson’s treatment is sensitive and lyrical, drawing almost exclusively on their letters for his libretto. There are flashes of ragtime and jazz in the accompaniment, suggestive perhaps of the dialect nature of some early Dunbar poems, which brought him (ironically) the most attention. As the opera progresses and the relationship founders, these evocative touches become fewer.

The opera opens with a brooding, Brittenesque Prologue with the composer accompanying the two principals. It quickly develops with the chamber ensemble added as the initial courtship blooms. The critical moment for Dunbar’s literary reputation occurs early on (Act 1 scene 2) with the career-changing review in Harper’s Weekly; looked at with 21st-century sensitivities it makes uncomfortable reading. Less savoury aspects emerge of both characters: Dunbar’s womanising and ultimate dependence on his mother – related by his bitter former amour, Victoria – and Alice’s own anti-African American racism, in the heated exchange with Ms Lyons, the first of four roles sung with flexible virtuosity by Lindsay Patterson Abdou.

Act 1 closes with Paul in London, in an abortive relationship with Sarah (a nice vignette from Natalie Mann), drinking heavily to cope with tuberculosis. Act 2 follows his self-destructiveness, culminating with his drunken rape of Alice, who yet, in its final scene, resolves to marry Paul to establish themselves as a literary couple. In the briefer third act, incompatibility, illness and the baleful appearance of Paul’s mother, Mathilde (Lindsay Abdou again), result in separation; Dunbar died aged 33.

The cast are uniformly good and Stephen Tucker draws out some fine playing from The Sanaa Opera Project ensemble. Cameo Humes provides a strong portrait of the poet – too much so, perhaps, in Dunbar’s frailer scenes – but Angela Owens has more depth as Alice. There is too much reliance on recitative-style vocal lines, a common feature of modern opera, and too much for soprano; the opera needs a couple of strong alto roles. Nonetheless, The Mask in the Mirror is a haunting work that much repays attention. Navona’s recording is clear if a little airless.

THOMPSON The Mask in the Mirror

The Mask in the Mirror