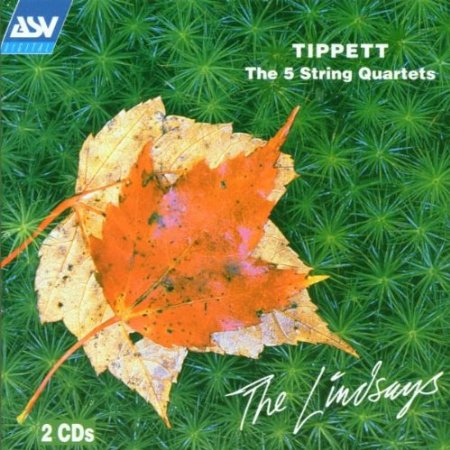 Tippett coached the Lindsay Quartet for these recordings of his first three quartets, and the other two were written for them. In a note written for their twenty-fifth anniversary in 1992 he said that in these recordings they were “concerned to establish good precedents in matters of style, so that succeeding generations of interpreters start at an advantage”. In fact one of the most enjoyable things about these readings is that they are so very characteristic of the Lindsay Quartet. Of course a number of the qualities that I call ‘characteristic’ are uncommonly well-suited to Tippett’s earlier quartets: big tone, sheer vigour of attack and an infectious enjoyment of his lithe sprung rhythms. But you might also say that Tippett himself has been challenging the Lindsays to produce different kinds of intensity in the two much more recent quartets written for them. Hearing the sparer, pared-down lyricism of the Fifth Quartet one is bound to wonder whether that sort of approach might cast new light on, say, the slow movement of the First, which in the Lindsay’s hands is eloquently full-toned; it would be interesting to hear it played more reticently.
These performances are indeed excellent precedents for later interpreters. They do establish a style – big-scaled, urgently communicative – that is presumably ‘authentic’ and yet they challenge listeners as well as other performers to imagine how else they might be done. They also affirm the aching absence of a quartet between the Third and the Fourth (Tippett intended to write one in the late 1940s or early 1950s but got side-tracked by The Midsummer Marriage and did not write another for over 20 years) and make one wonder what the rejected two movements of the First Quartet might be like. It is wonderful, though, to hear the five as a sequence in such authoritative readings. The recordings sound very well, but have been transferred at an exceptionally high level.'