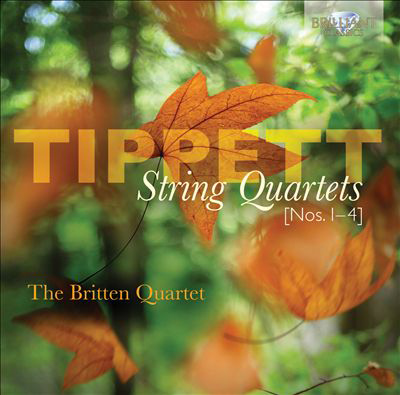 This new Collins Classics release is the first to offer Tippett's first four string quartets, without other music, on two CDs from the same company. The Lindsay Quartet recorded Nos. 1-3 for Decca and No. 4 (with Britten's Third) for ASV. Possibly one day this recording of No. 4 may be reissued with Tippett's new Fifth Quartet as a coupling.
The Lindsay Quartet have set a high standard of Tippett interpretation, with that special authority that stems from working on the music with the composer. Whatever else Tippett has done, he has not inhibited these players: their performances are characterized by a distinctive freshness and spontaneity, a well-balanced homogeneity of texture and a fine sense of rhythmic flow, essential if the music is not to coagulate around its multitude of contrapuntal details.
The Britten Quartet now step boldly forward to offer their own quite different approach. It is clear that they take the scores, as instructions for performance, very seriously indeed. If the Lindsay are romantics, the Britten are classicists: intense, forceful, rather severe in the lyrical and contemplative music. If you like their approach to rhythmic articulation, you may conclude that the Lindsay performances are under-accented. Alternatively, the Britten Quartet over-accents: and the third possibility is that both approaches are equally valid.
I can't quite persuade myself that the third possibility is true. It may well be that the Britten Quartet have even greater technical command than the Lindsay—for example, the Britten play the double-stopped alternatives in the early stages of Quartet No. 4. But their tendency to suggest Olympian detachment in places where the music is marked dolce or espressivo leads at times to a rather joyless spirit. They have abundant vitality, but rather less in the way of wit and flexibility—the exuberant gentleness of the Lindsay Quartet in the Presto of No. 2 is a revelation in this respect. With the Britten's relative coolness comes the suspicion that they may still be too close to a study of the music to do it the fullest justice interpretatively. For instance, the ebullient finale of No. 1 threatens to stagnate: the expressive nuances in the second movement of No. 2 sound added rather than integral: and throughout No. 4 I had the impression that the players were striving to integrate music which thrives on a balance of diversities.
To this extent my response to the Britten Quartet recordings echoes my feelings about their recordings of Britten's Second and Third Quartets (12/90). The sound is similar too: spacious, but of analytical brightness. The Lindsay have a more natural ambience, and this fits the spirit of their playing to perfection.
There is great music here: the Second and Third Quartets are essential documents in the history of twentieth-century chamber music, and marvellously complementary in form and character. The Britten Quartet's highly wrought readings command considerable respect, even if in the end they don't persuade us that their alternative view works as well as that of their rivals.'