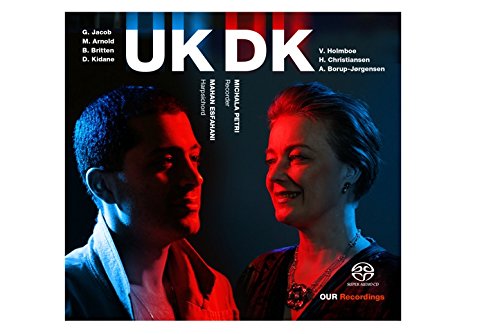 This is not the first time Michala Petri has juxtaposed recorder works from Britain and her home country, Denmark. A quarter of a century ago she combined solos, duos and trios – with other Petri family members (RCA, 5/89, long out of print) – by Arnold, Asger Christiansen, Holmboe, others from Germany and Norway, plus the wonderful Sonatina Gordon Jacob wrote for her in 1983, also included here. None of the other works has been repeated from that earlier disc and of the composers only Britten did not write specifically for her.

Although Malcolm Arnold wrote several pieces for Petri, ironically she and Esfahani play the engaging Sonatina (1962, with piano accompaniment originally). As with Britten’s Alpine Suite (1955), written as a recorder trio for an injured friend on a skiing holiday but given here in an arrangement by the performers, this is lighter music emphasising the recorder’s brightness. It is the Jacob Sonatina that hints at greater depth, while Henning Christiansen’s charming vernal diptych avoids the inconsequentiality of the Britten. Daniel Kidane (b1986) and Axel Borup-Jørgensen take the instrument into a different tonal dimension. Kidane’s horological fantasia Tourbillon – commissioned for this CD – was written to a requirement for ‘a very exciting and demanding piece’ and pushes boundaries very differently to Borup-Jørgensen’s more radical Fantasia (1988).

The warm heart of this superbly played programme is the Sonata (1980) by Holmboe, who, like Arnold and Jacob, wrote several works for Petri. Like all late Holmboe, light and peace are the pervading features of the three movements. A wonderful advert for this instrumental pairing and for virtuosity in general. Superbly engineered sound.

Sonatina for Recorder and Harpsichord

Sonata for Recorder and Harpsichord

An Encore for Michala