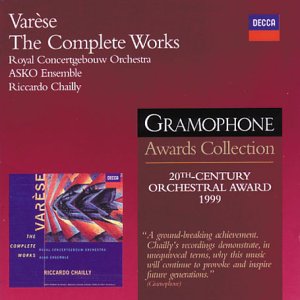 This set is announced as “The Complete Works” of Edgard Varese, which, in the context of the listed comparisons, is certainly true. Moreover, with the Boulez recordings, made over the period 1977-83, now sounding their age and Nagano’s survey lacking sheer dynamic presence, Chailly sets new standards for an overall collection.
‘Complete’ requires clarification. Excluded are the electronic interlude, La procession du Verges, from the 1955 film Around and About Joan Miro (is this still extant?) and the 1947