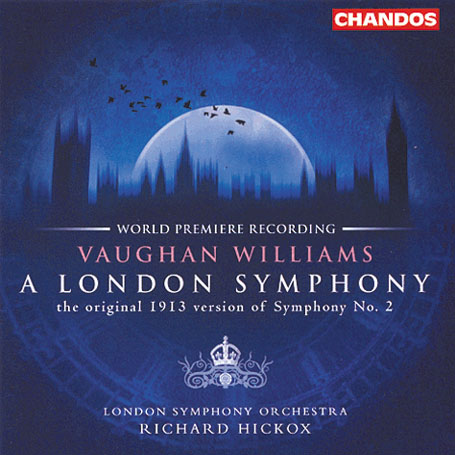 It was during the summer of 1911 that George Butterworth (a victim of The Great War, and whose enchanting 1913 idyll, The Banks of Green Willow, comprises the achingly poignant curtain-raiser here) first suggested to Vaughan Williams that he should write a purely orchestral symphony. VW dug out some sketches he had made for a symphonic poem about London, whilst at the same time deriving fruitful inspiration from HG Wells’s 1908 novel, Tono-Bungay (and its visionary final chapter in particular). Geoffrey Toye gave the successful Queen’s Hall premiere in March 1914, and VW subsequently dedicated the score to Butterworth’s memory. Over the next two decades or so, the work underwent three revisions (including much judicious pruning) and was published twice (in 1920 and 1936). In his compelling 1941 recording with the Cincinnati SO, Eugene Goossens employed the 1920 version, which adds about three minutes of music to that definitive 1936 ‘revised edition’. Now Richard Hickox at long last gives us the chance to hear VW’s original, hour-long canvas – and riveting listening it makes too!
Whereas the opening movement is as we know it today, the ensuing, expanded Lento acquires an intriguingly mournful, even world-weary demeanour. Unnervingly, the ecstatic full flowering of that glorious E major Largamente idea, first heard at fig F in the final revision, never materialises, and the skies glower menacingly thereafter. Towards the end of the Scherzo (at 5'44) comes a haunting episode that Arnold Bax was particularly sad to see cut (‘a mysterious passage of strange and fascinating cacophony’ was how he described it in his autobiography, Farewell, My Youth [Scholar Press; 1992]). The finale, too, contains a wealth of additional material, most strikingly a liturgical theme of wondrous lyrical beauty (try from 6'42) and, in the epilogue, a gripping paragraph (beginning at 15'47) which both looks back to the work’s introduction as well as forward to the first movement of A Pastoral Symphony. Sprawling it may be, but VW’s epic conception evinces a prodigal inventiveness, poetry, mystery and vitality that do not pall with repeated hearings, and, time and again, I find myself marvelling at just how hugely influential its intoxicatingly colourful orchestral palette must have been on Holst’s The Planets and even Bax’s wartime tone-poems.
Hickox and the LSO respond with an unquenchable spirit, generous flexibility and tender affection that suit VW’s admirably ambitious inspiration to a T, and Chandos’s sound is big and bold to match. Quite simply, an essential purchase for anyone remotely interested in British music

(The) Banks of Green Willow