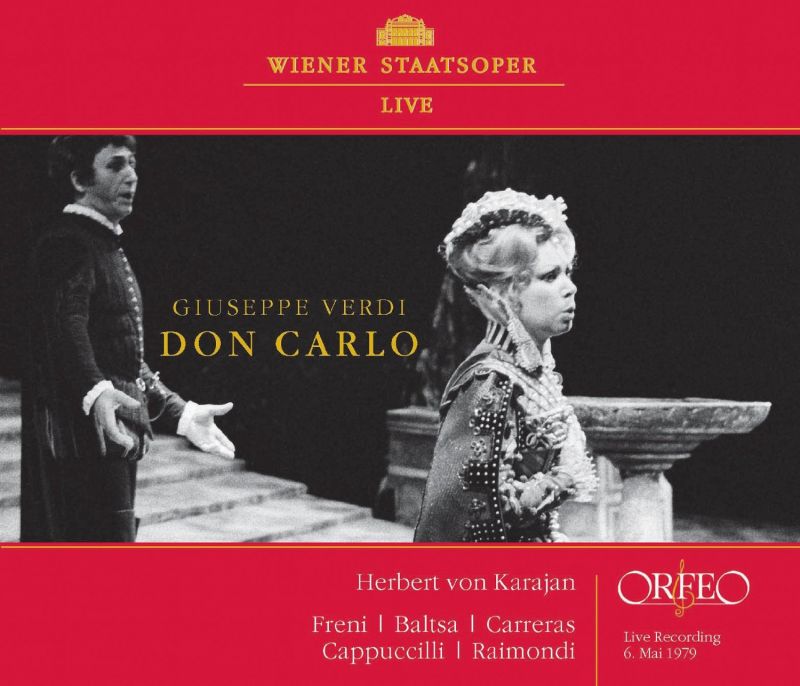 This comes from the third of the four consecutive spring seasons that celebrated Karajan’s return to the Vienna State Opera more than a decade after his abrupt resignation. It has the same cast as the Berlin studio recording of 1978, with the exception of Raimondi’s promotion – or transfer! – from inquisitor to monarch. As on that recording (which I haven’t heard), Karajan adopts the four-act version of 1884; but that statement requires elaboration. According to the booklet-note, ‘the confrontations between Carlos, Philip, Posa and Eboli interested [Karajan] more than the love between Carlos and Elisabeth’. As a result, the music for the frustrated lovers is pruned: out goes Carlo’s delirium, Elisabeth loses a chunk of ‘Tu che la vanità’, and their parting duet suffers a huge cut of 67 bars. But that’s not all: Eboli gets only one verse of her Veil song, as does Elisabeth in the farewell to her dismissed lady-in-waiting; and there are cuts too in the Auto-da-fé scene. One more caveat. The balance is mostly satisfactory but there are passages – the monks at the beginning, Carlo defending himself at the end – when the voices are almost inaudible. Contrariwise, the banda is so close as to make its music sound even more tawdry than usual.

If you can discount these drawbacks, you are actually left with a first-rate performance. Karajan galvanises the orchestra, the singers sound as if they are listening to one another and there are some beautifully floated soft phrases. It’s a pity that Karajan didn’t disallow Salminen’s (admittedly mild) crescendo where, piano pianissimo, the Inquisitor demands the head of Posa, Philip’s only friend. This scene takes a while to get going: the sinuous beginning lacks weight but the dialectical exchange between church and throne is gripping. Raimondi, softer-grained than Christoff or Ghiaurov, does the king’s loneliness very well. Cappuccilli, dangerously assertive in his duet with Philip, brings generous tone and exemplary breath control to Posa’s dying words, while Carreras is absolutely thrilling when Carlo confronts his father at the auto-da-fé.

As recorded, Freni sounds rather squally on her top notes but she brings tenderness as well as passion to her impossible role as fiancée-turned-stepmother. And although Baltsa makes a predictably fiery Eboli, it’s her confession of love rejected that is really moving. Now, for the second time of asking, may we please have the 1989 Vienna performance of the five-act version, conducted by Abbado?