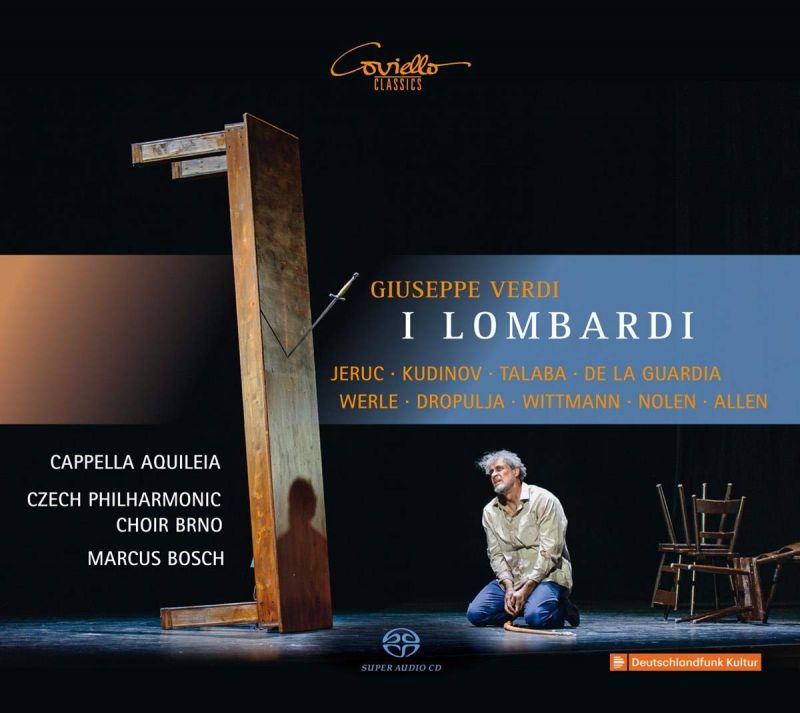 Recorded at last year’s Heidenheim Festival, this audio-only version of Verdi’s fourth opera comes hard on the heels of Michele Mariotti’s Turin performance, released both on disc and DVD by Dynamic late last year. Reviewing the latter in February’s Gramophone, Richard Lawrence discussed the musical unevenness and dramatic flaws that have hindered the work’s wide acceptance, to which Uwe Schweikert’s booklet note for the new set, often unsparing in its criticism, adds concerns that the opera’s ‘falsification of the historical crimes’ of the first Crusade, in particular the massacre in 1099 of the Arab and Jewish population defending Jerusalem, can nowadays ‘only be recognised by audiences with a certain degree of unease’.

Both the work’s admirers and detractors would acknowledge that it sprawls somewhat; and in what one assumes is a quest for greater dramatic tautness, the Heidenheim performance cuts some 30 minutes from the score. Mostly this is a question of jettisoning repeats, either within numbers or of cabalettas, though the Act 4 battle music has also been trimmed. In the process, however, an unwieldy work has been to some extent further unbalanced. The Act 1 quintet, for instance, loses much of its clout when both its imposing slow section and exhilarating stretta have been shortened. And the cuts don’t, I’m afraid, iron out the much-discussed narrative implausibilities and inconsistencies for a second.

It’s decently sung, though, and sometimes much more than that. Both tenors, León de la Guardia as Arvino and Marian Talaba as Oronte, can be effortful: Talaba makes heavy weather of his Act 2 aria but settles as the performance progresses, and de la Guardia compensates for his occasional moments of strain with a notably vivid characterisation. Ania Jeruc is a fine Giselda, floating her ‘Salve Maria’ with superb poise, yet possessing enough heft and dramatic fire to make a real impression in her big Act 2 cabaletta, of which she is mercifully permitted to sing the repeat. Pavel Kudinov, meanwhile, warm of tone and strikingly intense, admirably captures Pagano’s agonies of conscience and yearning for salvation. The choral singing is consistently beautiful – ‘Gerusalem … Gerusalem …’ at the start of Act 3 is very much a high point – as is the Cappella Aquileia’s playing for Marcus Bosch, though there are times when he could propel the score forwards with more urgency. The cuts make it difficult to recommend, though, and it’s by no means a first choice for the work itself, of which Gardelli’s RPO recording remains very much the benchmark.