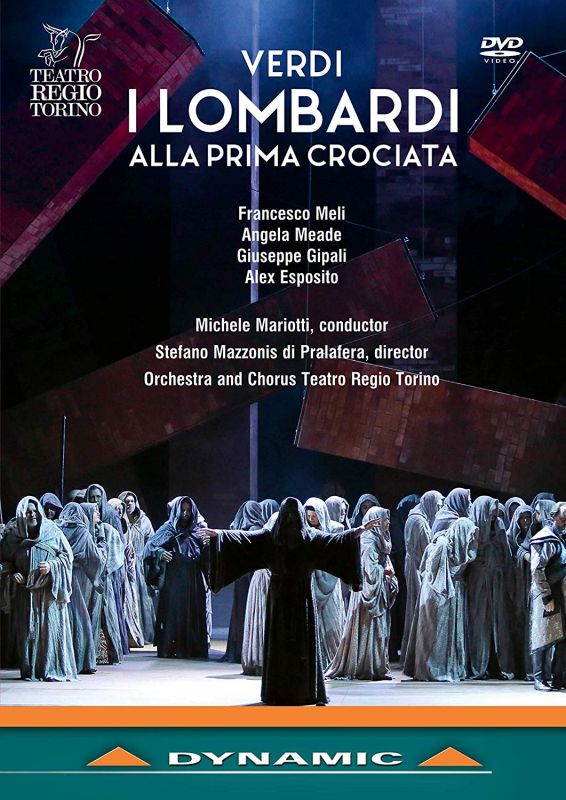 The Lombards at the First Crusade was Verdi’s fourth opera, commissioned by the impresario Merelli after the success of Nabucco. It was premiered at La Scala, Milan, in February 1843 and, like its predecessor the year before, went down a storm. One of the most popular numbers was a chorus of crusaders and pilgrims that – let’s say opportunistically – recalled ‘Va, pensiero’, the chorus of Hebrew slaves.

If I Lombardi is not performed much nowadays its neglect, I’d say, is entirely justified. The story is preposterous, Solera’s libretto full of holes. Whereas in the original poem by Tommaso Grossi the action is spread over some 20 years, only a few months separate Acts 1 and 2: so we are asked to accept that Pagano, penitent after trying to murder his brother Arvino, has not only become a hermit but is suddenly a ‘venerable old man’ with, in this production, flowing white locks and a beard better suited to the Emperor Altoum in Turandot. Moreover, it is quite impossible to believe that the chorus of crusaders has spotted Pagano when his own brother and his former henchman Pirro have failed to recognise him. As for the music, there are good things, of course – this is Verdi, after all – but there are also weak choruses, a sickly vision of Oronte addressing his lover Giselda from heaven and, incredibly, a Paganini-like violin concerto that introduces and pervades the Act 3 finale.

I doubt that this new production from Turin will win the opera many friends. The sets are simple: the façade of the basilica of Sant’Ambrogio in Milan; an arcade that serves for the palace of Acciano, the Muslim ruler of Antioch and, later, as a frame for the distant view of Jerusalem. The traditional costumes are handsome. But the director Stefano Mazzonis di Pralafera shows little imagination in his handling of the action. And he and the conductor Michele Mariotti between them should have stopped the cast from striking applause-soliciting attitudes. The end of the cantabile section of Pagano’s Act 1 aria is marked ff followed by a hairpin diminuendo: Alex Esposito crescendos. The last note of Oronte’s cavatina is marked pp dolciss: guess what Francesco Meli does. There are other instances.

Meli is pretty hefty throughout: one longs for the elegance of Carlo Bergonzi (see his collection of Verdi arias on Philips). Esposito makes a sturdy Pagano. The star is Angela Meade as Giselda: not at first sight a convincing daughter to Lavinia Bini’s Viclinda, she sings magnificently with exquisite pianissimos. Her ‘Salve Maria!’ is one of the highlights, beautifully phrased. Another highlight is ‘Gerusalem! Gerusalem!’, the delicate scoring including a solo cello. This forms the opening of Act 3 and the Teatro Regio chorus do it proud. The orchestra does well, too: I especially liked the growly trombones associated with Pagano. The English subtitles are not entirely idiomatic: ‘Are you the cave man?’ asks Arvino. The CD set includes libretto and translation; it might be a better bet than the DVD, but Gardelli with Deutekom, Domingo and Raimondi (Decca, 11/89) would be better still.