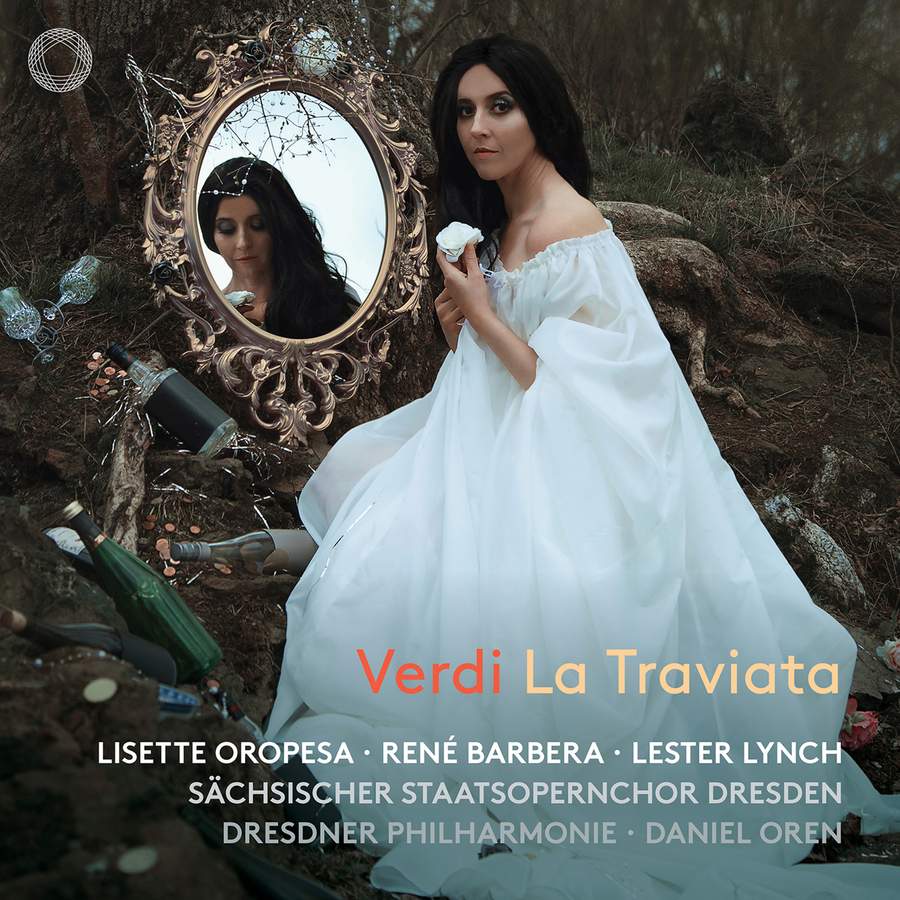 The urgency to record Lisette Oropesa in La traviata was inevitable after her breakthrough 2015 role debut as Violetta at Opera Philadelphia, possibly from the moment in the first scene when she sang with utter confidence while riding across the stage atop a rolling white grand piano. Subsequently, she emerged as perhaps the most accomplished Violetta since Angela Gheorghiu – with a similarly small, shimmering vibrato, perfect for projecting the courtesan’s inner tragedy, with a flexibility allowing her to encompass the character’s stages of vocal life.

Admirably, Pentatone assembled these studio forces amid semi-lockdown at the expansive Kulturpalast Dresden, with performers scrupulously spaced throughout the hall’s vineyard-style seating. Unaware of those circumstances, I dived straight into the sound files but knew immediately that something was different. Conductor Daniel Oren’s treatment of the Act 1 party music felt uncharacteristically strict, more about a hard-won sense of ensemble than the compulsive pleasure-seeking in Violetta’s world. Exchanges between Violetta and Alfredo had little chemistry. Order is good in Traviata but different kinds of heat are required at every turn. Oropesa’s great first-act set piece climaxing in ‘Sempre libera’ (in which she takes the optional high E flat) is similarly polished but with little of the electrifying recklessness that made her live Covent Garden performances (heard on radio broadcast only months after the Dresden recording sessions) the work of an artist reaching for a different level.

Luckily, everything in this Dresden project loosens up thereafter, and by the end the listener is left with a worthy Traviata that occupies a certain niche in the opera’s rich discography, but not as a first choice if only because the overall cast and orchestra still feel studio-bound. Oropesa, though, represents a break from the Violettas of decades past with her clean vocalism and way of inhabiting the role from within, minus a lot of external emotional signalling. The tragic final scene is conveyed with many feats of shading, achieved as much through vocal technique as emotional inspiration, giving her characterisation as much dignity as desperation.

From the start of that final scene, Oropesa seems to have taken her cue from the dying Violetta describing herself as ‘weak in body but tranquil in soul’. Though suitably operatic, she trusts the text – and her ability to project it in highly direct ways. This is where Oropesa stands strikingly apart from the more histrionic Gheorghiu (on Georg Solti’s Decca recording). And it may be a sign of the times. The historically informed Traviata conducted by Jeremie Rhorer in 2018 at the Théâtre des Champs-Élysées (also heard in a radio broadcast) let the opera emerge naturally from the clarity of its own notes, though Oropesa takes that approach further than Rhorer’s Vannina Santoni.

Elsewhere in the Pentatone recording, tenor René Barbera’s Alfredo sounds suitably Italianate, in command of the role, but mostly maintains a medium voltage, even in the confrontational Act 2 scene 2. Lester Lynch is a distinctive Germont: the voice itself may be outgrowing the role but the juxtaposition of aristocratic poise and utterly unvarnished vulnerability is unlike any in my experience. Secondary roles are handled well enough. The overall sound of the recording is attractively resonant while also capturing the darker shades of Oropesa’s voice. Still, I would rather revisit the scintillating Covent Garden broadcast conducted by Antonello Manacorda, in which Oropesa’s dying Violetta emits a long, penetrating G on ‘Ah! Gran Dio’ that haunts my dreams. But when I want reminders of the power of chemistry in Verdi sung by more stentorian voices, I turn to the 2005 Anna Netrebko/Rolando Villazón/Thomas Hampson Traviata under Carlo Rizzi – the audio recording, not the less satisfactory video.