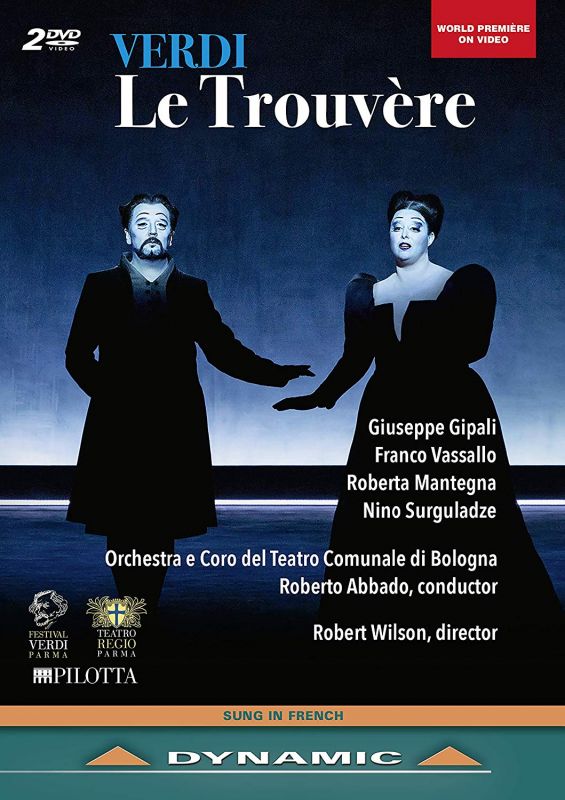 This is Verdi’s Il trovatore and it is not Verdi’s Il trovatore. That’s not just because this is the 1857 French-language version of the opera – presented by the Parma Verdi Festival in a new critical edition – but also because it’s a Robert Wilson production. And a Robert Wilson staging doesn’t so much present a piece as float above it. The characters are not there to enact the drama; instead they appear to represent it. The whole harmonious vision is more important than narrative flow. This collision of an unfamiliar version of a classic opera, in a language you don’t expect to hear it, alongside Wilson’s abstraction reinforces the overall dislocation. The result is strangely compelling.

The score of Le trouvère is by no means wildly different from the urtext but, knowing the Parisian public, Verdi leavened the textures and added lighter, brighter effects: if the original score is an earthy barolo, this one is more like a silky burgundy. There are a few embellishments, some cuts and an altered ending in which the death of Manrico – here Manrique – is less abrupt: to my mind, it’s a superior alteration.

The most significant addition is the elaborate ballet in Act 3, where suddenly Comte de Luna’s troops are supposed to be entertained by some apparently carefree and fleet-footed gypsies. Wilson, predictably, has no truck with this scenario. While Roberto Abbado and the Orchestra of the Teatro Communale di Bologna polish up the not disagreeable ballet music to a shine – bouncy music that includes a thrifty rejig of the Anvil Chorus – an ensemble of boxers come on with big red gloves, watched by a mysterious old man. These pugilists run, they play-fight, they even do some graceful waltzing. The surreal movement is a strange, curved mirror to the eerie charm of the music: yes, it’s deeply odd, but in keeping with a morbidly chaotic opera. Framed by Wilson’s typically austere sets and lighting, the sequence encompasses beauty, violence and comic-book humour. If it wasn’t for the tightness of the direction (admirably filmed for DVD and Blu ray) and the playing, it would fall apart completely.

Elsewhere, this Trouvère unfurls with dreamlike elegance. The singers form hieratic poses, with outlandish costumes (think helmets with horns) and elaborate, frozen make-up. It’s a strong cast, although it’s a shame none are native French speakers. Only Nino Surguladze’s Azucena seems to bridle at Wilson’s minimalist restrictions, and so she undermines the impact of her velvety mezzo. Spared the usual repertoire of aimless hand semaphore, however, both Giuseppe Gipali’s impressive Manrique and Roberta Mantegna’s silvery-voiced Léonore find more vocal freedom. Franco Vassallo’s de Luna is a bumpier ride, forcing his tone too often. Marco Spotti is an assured Fernand, and the Bolognese chorus are strong.