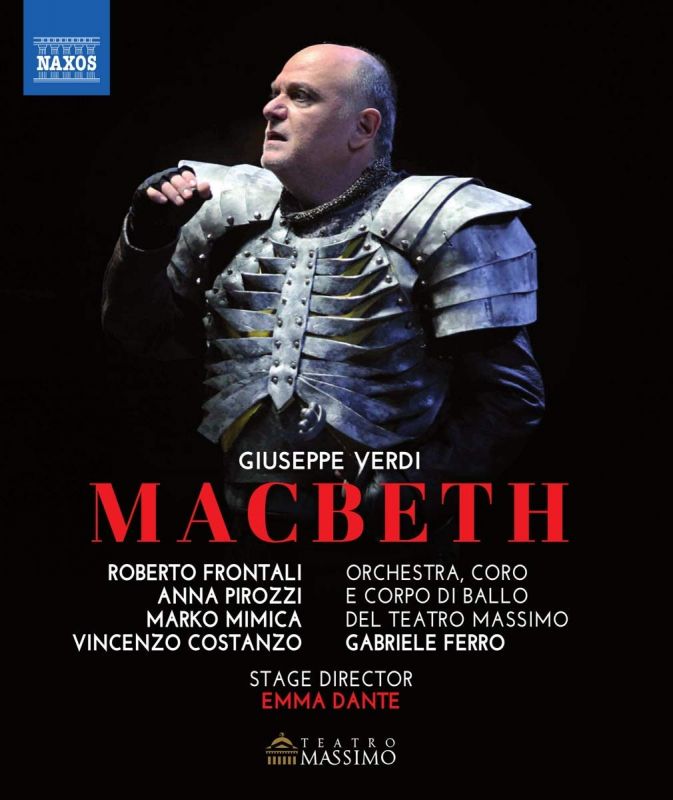 A Macbeth cast entirely with Italians, with an Italian production team, filmed in Italy: this release has claims to a certain authenticity. And, as with similar recent Verdi releases from Dynamic (although this appears on Naxos, it is identified as a Dynamic production), it also gives a chance to take the pulse of the Italian opera scene, and in this case of the Teatro Massimo in Palermo specifically.

The signs are not all encouraging. The orchestral playing under Gabriele Ferro starts off thin and scrappy, in the higher strings especially, and remains so throughout – things go pretty drastically off the rails in the introduction to ‘Pietà, rispetto, amore’, for example, just one moment where the quality of the playing undermines any sense of dramatic tautness. The choral singing is also weak. A quick comparison with Antonio Pappano’s Royal Opera forces in Opus Arte’s film of Phyllida Lloyd’s Covent Garden production (7/12) reveals what’s missing on both counts.

Emma Dante’s production has clearly been put together on a budget, employing minimal scenery – rickety ironwork features heavily – on an empty stage against a black background. She makes liberal use of the theatre’s corps de ballet, including raunchy rollicking to precede the witches’ scenes. The witches themselves, played by both dancers and chorus, have a pronounced penchant for Zombie-like twitching. That, and the skeletal horse on which both Macbeth and his wife make entrances, are not always easy to take entirely seriously, but it’s a show with several stylish moments. Costumes are stern with a militaristic twist.

There are some good voices in the cast. Roberto Frontali is a reliable Verdian and turns in a decent performance as Macbeth. But the voice has lost some of its juice and his acting is hardly revelatory. Anna Pirozzi is a sturdy Lady Macbeth, although it’s not a portrayal that catches fires as one would hope – she’s not helped, admittedly, by the orchestral support or by her witchy costume. Among the smaller roles, Vincenzo Costanzo makes a strong impression as a bright-voiced Macduff.