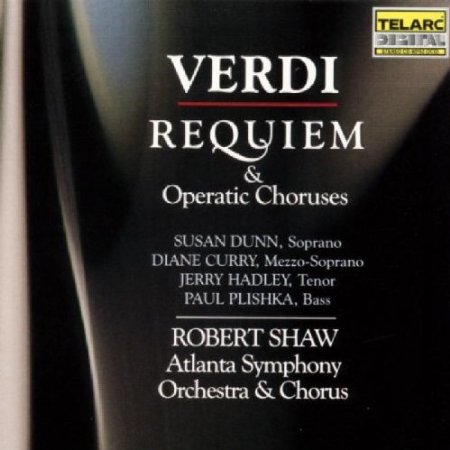 It may seem surprising to recommend a Verdi Requiem conducted by Robert Shaw over all those listed above, directed by world-famous conductors, but that is what I intend doing for any number of reasons. But I ought to begin by telling those younger readers about Shaw. Now 71, he was in his earlier days in charge of the eponymous Robert Shaw Chorale, from 1948 to 1966. Before that he was asked by Toscanini to prepare the chorus for his recordings with the NBC Symphony. Since 1967 he has been Music Director in Atlanta where, as earlier records have shown, he has done sterling work but nothing quite to equal this new set. With the credentials listed above, it is hardly surprising to hear him follow Toscanini's example in matters of tempo and orchestral clarity in this work or to find that he inspires his chorus to achieve such great things.
I don't think any of the other sets on CD has choral singing to equal that here. Muti's La Scala Chorus (EMI) sounds more Italianate, which has its advantages as I pointed out in my review of that version, but if you compare the two choirs in, say, the Sanctus, which Shaw, unlike Muti, takes at the right tempo, you will hear the greater incisiveness of the Atlanta Chorus, also its firmer tone, and throughout the work the dedication and precision of their singing is truly remarkable. The only real rival in these respects is the 1964 Philharmonia but in its case the recording now sounds dated. Indeed, to clinch the Telarc's superiority, they have the most exciting, immediate recording of a chorus I have yet encountered in this work.
I think a great deal of my pleasure in listening to this performance derives from hearing what is an obviously well-prepared reading in which all the performers are unanimous in their approach, and know what they are doing both individually and collectively. The orchestra as much as the chorus respond naturally and confidently to a conductor with whom they have long been familiar while Shaw himself never once comes between us and the composer. With Muti you feel that the conductor is imposing his highly histrionic view on his performers so that the Dies irae, at a slightly unsettling tempo, becomes merely hectic. With Shaw, at Toscanini's, and Verdi's, speed it seems awesome as it should be. The conductors above who come closest to Shaw in these matters are Giulini (EMI) and Kord (Rodolphe), but only in the indifferently recorded but still wonderful Giulini do I sense quite the same conviction as Shaw evinces.
The same feelings apply to the soloists. You will hear this and that solo sung more individually perhaps more beseechingly elsewhere, notably the mezzo ones by Ludwig on the Giulini, the tenor ones by Pavarotti for both Solti (Decca) and Muti, the bass ones by both Mroz (Kord) and Ramey (Muti), but nowhere is there such a well-co-ordinated team as here. That old critic's short-hand writing of 'an equally balanced quartet' is here really true, the four voices blend ideally mainly because all the singers have true, firm tone and avoid ego trips, vide the whole of the Ogertorio, which is also eloquently shaped by Shaw. My one proviso is that in the unaccompanied passages they are loth to sing as piano as Verdi enjoins.
Individual mention is certainly needed in the case of Susan Dunn. Reports coming out of the USA suggested that she was as important a spinto discovery as either Millo or Vaness, and I am inclined to agree. The voice is firm, fresh and secure from top to bottom, has sufficient bite to carry it over the whole assembly of singers and players when needed, and an ability to float—listen to ''huic ergo'' in the Lacrymosa and the soprano's first entry in the