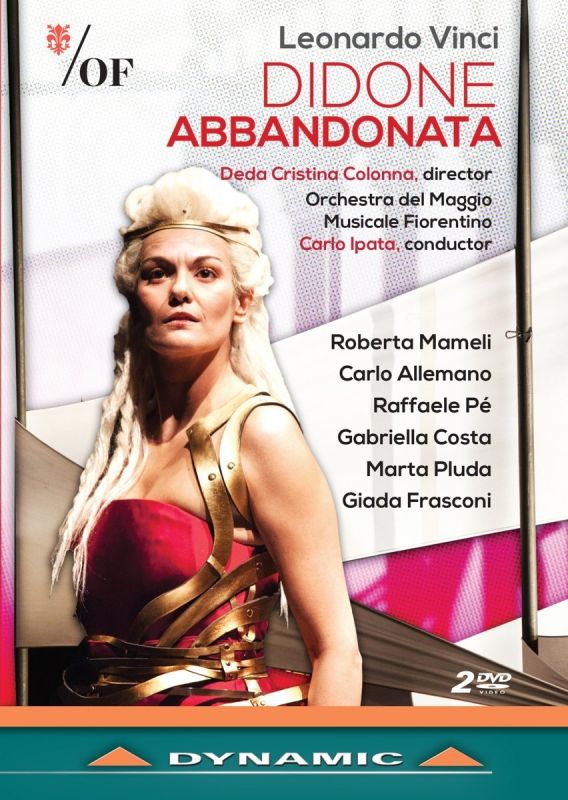 Leonardo Vinci was a busy bee in the winter of 1725‑26, working simultaneously on three operas: Astianatte for Naples, Didone abbandonata for Rome and Siroe re di Persia for Venice. The latter two were to librettos by Metastasio, who provided four more before Vinci died – possibly poisoned, a real death-by-chocolate – in 1730. Didone was Metastasio’s first original libretto, set in 1724 by Domenico Sarro. For Vinci he revised his text, removing some arias and adding new ones. This production from Florence spoils his careful planning by turning the three acts into two; sadly the audio version, on three CDs, fails to take the opportunity of putting this right.

Dido and Aeneas are in love. The story turns on Aeneas’s vacillation as he prepares to leave Carthage for ever, to found a new Troy in Italy. He has a rival in Iarba, the Moorish king, who is after Dido as well as her kingdom. Dido pretends to love Iarba, in order to provoke Aeneas’s jealousy and force him to stay. Osmida betrays his queen by offering to plead Iarba’s suit in return for the throne. Araspe, Iarba’s confidant, behaves honourably, refusing to murder Aeneas, but he later seeks him out for a duel. Araspe is in love with Selene, Dido’s sister, who only has eyes for Aeneas. Iarba sets fire to the city and Dido, abandoned or betrayed by everyone and cursing the gods, perishes in the flames.

The music is mainly in the light Neapolitan style that was to become popular across Europe. Carlo Ipata is credited with ‘Musical Revision’. There’s no indication of what this entails: as presented, the scoring is for strings, with or without oboes. The opening Sinfonia features the horns, in Brandenburg No 1 mode; they return for Aeneas’s last aria, while it’s trumpets that sound for Iarba’s vengeful ‘Cadrà fra poco in cenere’. Vinci’s characterisation of the queen is brilliant: she is imperious in ‘Son regina’, but when she pleads with Aeneas in ‘Se vuoi ch’io mora’, violins answering the voice, the music has an intensity and beauty worthy of Handel. And her accompanied recitative at the end, so effective dramatically, is perhaps the prototype for similar scenes in French and Italian opera throughout the 18th century.

Deda Cristina Colonna’s production is straightforward, with rather unconvincing fights. The set is simple – steps, scaffolding – and the costumes are lavish. From time to time, silhouettes of figures or ships are seen. In 1726 Rome all the parts, male and female, were sung by men. The cast here is led by Roberta Mameli, in a big blond wig, commanding and vulnerable. Her Aeneas is Carlo Allemano, looking rather like Jack Hawkins’s Quintus Arrius in Ben-Hur. He, like all his colleagues, tackles the coloratura passages as if they were the easiest thing in the world. The countertenor Raffaele Pé makes a particularly nasty Iarba. The other three characters are well acted and sung. The violins of the Orchestra del Maggio Musicale Fiorentino are not quite top-drawer but the horns are excellent. Carlo Ipata keeps things moving (it’s quite a long haul). All in all, this is a useful contribution to our knowledge of a still largely unfamiliar period of opera history.