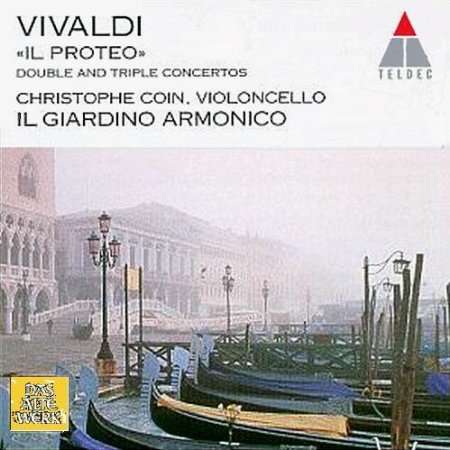 The most recent of Il Giardino Armonico's releases brings together six of Vivaldi's concertos for two and three solo string instruments. Musically, it is a strong programme which almost unfailingly presents the Venetian composer in his most colourful clothing. Though Vivaldi often wrote imaginatively for pairs of wind instruments his musical ideas were of necessity confined by their technical limitations. With violins and cellos, on the other hand, he was better able to extend his creative faculties, which resulted in music of more sustained interest. This is certainly true of the two concertos which he wrote for two violins, two cellos and strings. One of them (RV564) is included here and I very much hope that the other (RV575) will feature in a subsequent release. Making an even rarer appearance on disc is a Concerto in F major for violin and cello (RV544), the least well-known of three such works from Vivaldi's pen. Two versions of this concerto exist, the other (RV572) containing additional parts for pairs of flutes and oboes. Both carry the engaging title Il Proteo o sia il mondo al rovescio. Infrequently performed, too, is a C major piece for violin, two cellos and strings (RV561), though the characteristically Vivaldian ritornello of the opening movement may recall other contexts in the minds of listeners. The three remaining works are fairly mainstream Vivaldi: the G minor Concerto for two cellos (RV531), the F major Concerto for three violins (RV551) and the A major Concerto for two violins, one of them functioning as an echo, the violine per eco in lontano (RV552).
From this, readers will infer a pleasing variety of texture and, within the limits of a purely string programme, colour. Il Giardino Armonico have thought carefully about the latter, ringing the changes in the keyboard continuo between organ and harpsichord, and introducing a theorbo, too. But what makes this disc a real winner is the exhilarating character of the playing, both solo and ripieno. Sometimes in the past I have expressed reservations about the seemingly exaggerated dynamic gestures of this group. Not so here, where playing of vitality and lyricism brings Vivaldi's music to life in a thrilling manner. Indeed, the integrity and musicianly character of these performances is in no small measure heightened by the presence of Christophe Coin. His artistry and deep thoughts about interpretation have been apparent in many past recordings and notably those of his string quartet, Quatuor Mosaiques. Here, Coin seems to have had a tempering influence upon those at times startlingly aggressive mannerisms which have undoubtedly made a strong initial impact on audiences but which pall on repeated hearings. This new release is excellent in every respect: fine music, fine playing and a fine recording. An outstanding issue.

Double Concerto for 2 Cellos and Strings

Double Concerto for Violin, Cello and Strings in F

Concerto for Multiple Instruments, 'per eco in lontano'