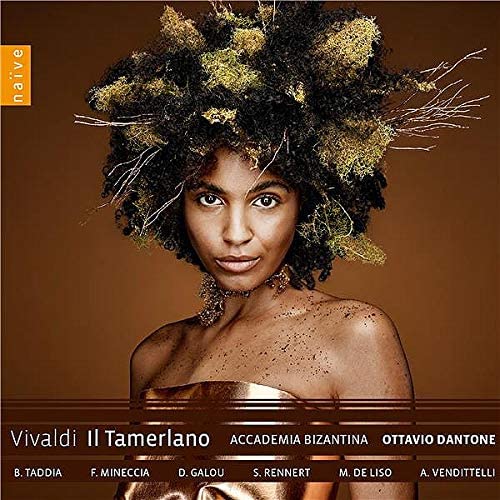 Vivaldi’s pasticcio was commissioned by Verona’s Accademia Filarmonico for their recently built theatre during the 1734-35 Carnival. The manuscript score (now in Turin) is titled Il Bajazet, whereas the Verona libretto was published as Il Tamerlano. The Sinfonia and many arias were recycled from the Red Priest’s own operas, the recitatives were composed afresh, and eight numbers are by Giacomelli, Hasse, Broschi and Porpora. Nevertheless, the Turin source has five lacunae that are filled in here by musicologist Bernardo Ticci, whose solutions are different from those devised by Fabio Biondi (for Virgin) and Erin Helyard (Pinchgut Opera). Naïve lists the sources of all the music after the track-listing; it takes quite a bit of disentangling, but Reinhard Strohm’s concise essay is expertly lucid.

Delphine Galou’s fluency and soulfulness are well-suited to Asteria’s emotional conflict between personal and political relationships: her scorn for Andronico’s protestations is dramatised vividly in ‘Stringi le mia catene’; the climax of the opera is Asteria’s seething report of her father’s suicide and her own venomous fury hurled at Tamerlano (‘Svena, uccidi, abbatti, atterra’, which Vivaldi might have interpolated into a production of Tamerlano in Milan in 1727). Andronico’s predicament caught between a rock and a hard place is characterised sympathetically by Marina De Liso: the siciliano ‘Quel ciglio vezzosetto’ and the limpid ‘Non ho nel sen costanza’ are shaded gracefully, and De Liso sings superbly in the trippingly elegant ‘La sorte mia spietata’ and heroic ‘Spesso tra vaghe rose’.